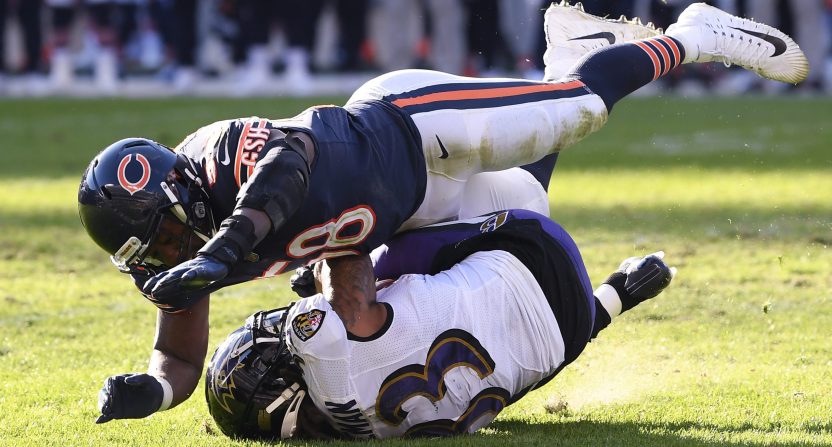 Every day there seems to be a strange, new wrinkle in the situation between the Chicago Bears and linebacker Roquan Smith.

Last week, Smith shocked the NFL world when he abruptly demanded a trade, saying that the Bears have not negotiated in good faith and don’t seem to value him.

“Unfortunately, the new front office regime doesn’t value me here,” said Smith. “They’ve refused to negotiate in good faith, every step of this has been “take it or leave it”. The deal sent to me is one that would be bad for myself and for the entire LB market if I signed it. I’ve been trying to get something done that’s fair since April, but their focus has been on trying to take advantage of me.”

Bears GM Ryan Poles responded by saying that his intention remains to sign Smith to a new deal, but that “at the end of the day we got to do what’s best for the organization. But my intention are to make sure Roquan Smith is on this team.”

Then came word over the weekend that someone was reaching out to other NFL teams on Smith’s behalf to inquire about trade opportunities, which is strange because the linebacker doesn’t have an NFLPA-certified agent.

On Monday, the identity of that person was clarified in a memo sent to all 32 teams stating “that a person by the name of Saint Omni, who is not an NFLPA certified agent, is contacting clubs indicating that he is representing Roquan Smith, who is under contract to the Chicago Bears.”

“Mr. Omni is prohibited from negotiating player contracts or discussing potential trades on behalf of any NFL player or prospective player or assisting in or advising with respect to such negotiations,” read the memo.

BearsWire tracked down Omni’s Facebook page, which hasn’t been updated in over two years but describes him as a “business consultant and manager for high profile NFL Athletes and celebrities.”

Even weirder is the tidbit from 670 The Score, which reached out to Omni’s workplace and was told that he exists but “he’s never in the same place twice” and doesn’t give out his cell.

.@ReyMDiaz — who was just promoted to 670 lead investigative reporter — is hunting down Roquan Smith pseudo-agent Saint Omni for an interview.

Omni's workplace confirms he exists but "he's never in the same place twice" and doesn't give out his cell.https://t.co/A4Y9VfM4QA pic.twitter.com/0mN63nvLOx

As for where things go from here, that’s anyone’s guess. Smith may have muddied the trade waters by allowing Mr. Omni to reach out to NFL teams. He might also have bluffed the Bears into upping their offer for him, especially if the season starts and they struggle.

But in the meantime, this wild story garnered some wild reactions on social media, especially regarding Saint Omni.

I love Roquan Smith, but this situation with self-representation and Saint Omni is hurting his value.

He's trying to play hardball with the #Bears, but he doesn't have much leverage. As it stands now, I have a hard time thinking he gets the money he's asking for.

The "he's never in the same place twice" comment is SO weird https://t.co/V5ckUj3mkk

Ryan Poles did say it was a “unique” situation https://t.co/m2HtdgwK23

Saint Omni, the patron saint of Georgia Championship Wrestling back in the 80s. https://t.co/HUj1jLClSz