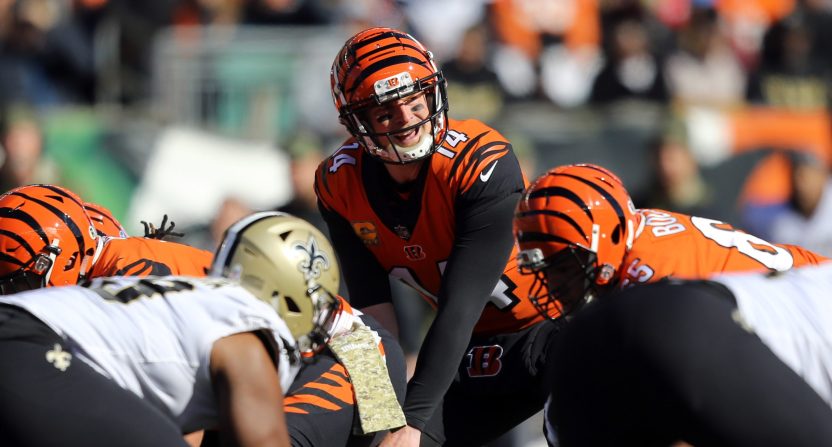 Andy Dalton spent last season splitting time as the starting quarterback for the Chicago Bears before Justin Fields was announced to take over. This season, it looks like the veteran quarterback is going to be firmly entrenched in a backup role with the New Orleans Saints.

Dalton signed a one-year deal with the Saints worth up to $6 million, including $3 million guaranteed, according to Adam Schefter.

Saints are signing former Bears’ QB Andy Dalton to a one-year deal worth up to $6 million, including $3 million guaranteed, per source.

The Saints re-signed Jameis Winston last week following a solid performance last year before an injury ended his season. Winston signed a two-year deal with a base of $28 million, signaling that they see him as their guy for 2022, at least for now.

Of course, Winston is also coming off an ACL tear, which means it will be good to have a veteran like Dalton behind him in case there’s another injury.

Dalton spent nine seasons with the Cincinnati Bengals as their starter, earning three Pro Bowl nods. After he was released to make way for Joe Burrow, he spent a season backing up Dak Prescott in Dallas before moving on to Chicago. While Dalton was never able to find the postseason success of many of his peers, he has racked up an impressive career stat line, including 5,018 yards, 226 passing touchdowns, 135 interceptions, and 22 rushing scores.

News of Dalton’s signing with New Orleans certainly earned some reactions around NFL Twitter. One of the things people noted was that this seemed to signal the end of Taysom Hill’s time as a part-time QB for the franchise.

If I were an NFL quarterback firmly in the "high-end backup" portion of my career, I'd just choose to live in the coolest cities possible while making $2-3 million.

Dalton just went from Chicago to New Orleans. He sees the vision.https://t.co/58rdDEiLDX

Perhaps this is why Hill is now officially a tight end. Cost spent per year on Winston, Hill, and Dalton is likely $27M. https://t.co/OufQUU3EBe

This, along with the announced reps at Tight End, screams Taysom Hill's days as a QB are done in the new #WhoDat regime.

A shame; I loved the swiss army knife. Sean Payton had the creativity to implement that. Dennis Allen? ❌ https://t.co/9fs60sakd9

Andy Dalton continues his streak of playing against the Bengals in every season after his Bengals career to 3! https://t.co/20klmfGx17

Bears legend. Happy for him! https://t.co/1ETQP3jTr1