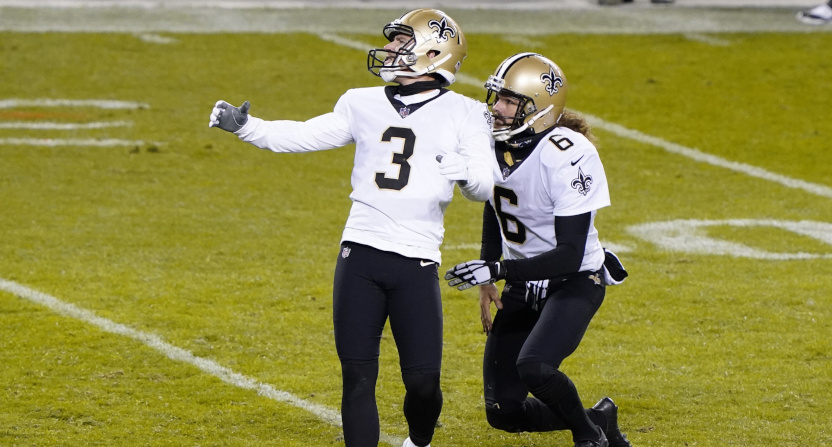 The Chicago Bears almost battled back at home against the New Orleans Saints Sunday, but they wound up coming up short with a 26-23 overtime loss. That dropped the Bears to 5-3 on the year, and improved the Saints to 5-2. Chicago quarterback Nick Foles completed 28 of 41 passing attempts (68.3 percent) for 272 yards with two touchdowns and an interception, but it was New Orleans’ Drew Brees who had the better performance on the night, completing 31 of 41 passes (75.6 percent) for 280 yards and two touchdowns (putting him atop the NFL record books, at least until Tom Brady plays Monday night) with no interceptions.

The Bears got off to a great start, putting up a 13-3 lead inside the final two minutes of the first half. However, Brees led a great two-minute drive in response, capping it with a 16-yard touchdown pass to Jared Cook in the final seconds. The Saints’ Wil Lutz then added a field goal to tie the game at 13, and then Chicago receiver Javon Wims was ejected for twice punching New Orleans DB Chauncey Gardner-Johnson in the helmet.

And that seemed to give New Orleans some more momentum. Following the Wims ejection, the Saints would get a defensive stop off Marshon Lattimore’s interception of Foles (on the subsequent play, even). They then added another field goal, then forced a punt, and then added a touchdown pass (a short throw from Brees to Taysom Hill, who took it 20 yards for the touchdown). That gave them a 23-13 lead with just under 10 minutes left.

Foles led a touchdown drive of his own in response, though, finishing that with a three-yard pass to Darnell Mooney. That made it 23-20 with around three and a half minutes left, and New Orleans could have finished the game in regulation with a clock-killing drive. But the Bears came up with a big defensive stop, forcing a punt at the two-minute warning. And Foles then led a 12-play, 35-yard drive, and Cairo Santos then tied the game with a 51-yard field goal in the final seconds:

Saints have been bailed out on missed kicks each of the past two weeks. Cairo Santos is clutch here from 51. #Saints have 13 seconds, but looks like we’re getting OT in this one. pic.twitter.com/RS4CpqjGAP

Overtime saw both teams not accomplishing much, though. The Saints got the ball first, but punted from the Chicago 50. The Bears then didn’t get far themselves (Foles completed one pass for 17 yards, but was sacked twice and threw incomplete twice; David Montgomery also picked up four yards on a run), and that gave New Orleans the ball back at their own 18. And Brees then led the Saints 52 yards in 2:12 to set up a 35-yard game-winning field goal from Lutz:

This wound up being quite the back-and-forth game, and it left some questions for both of these teams despite their decent records. Both offenses were extremely hit-and-miss here, running through hot and cold moments. And the overtime was particularly uninspiring, with each team punting before the final field goal. Still, the Saints picked up an important win on the road, so they come out of this with that, at least.