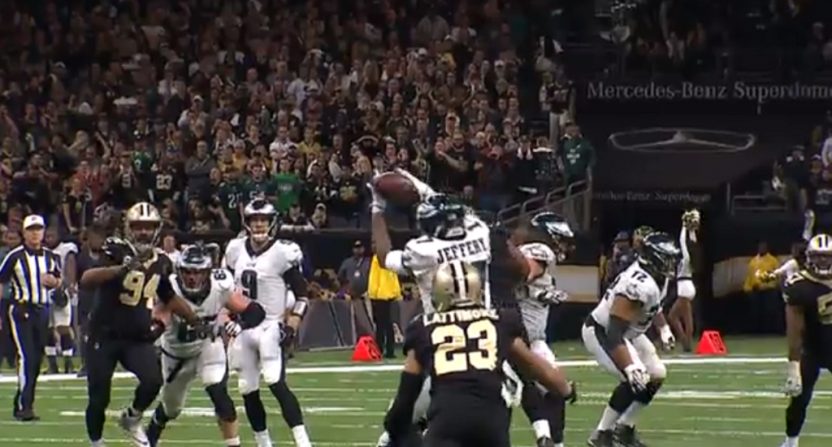 The New Orleans Saints entered this weekend as the Super Bowl favorites, following a 13-3 season that landed them home-field advantage as the NFC’s No. 1 seed. And they looked anything but that team in the first quarter of Sunday evening’s NFC divisional round playoff game against the Philadelphia Eagles.

Nick Foles and the Eagles outscored the Saints 14-0 in the first quarter, and had a crazy 153-21 advantage in the yardage department.

In the second quarter, the Saints finally looked like themselves, flipping the yardage difference and outscoring the Eagles 10-0 to trim the deficit to four points at halftime.

The Saints finally took a 17-14 lead with 1:44 remaining in the third quarter when Drew Brees connected with Michael Thomas for a two-yard touchdown to cap off a ridiculous 18-play, 92-yard, 11:29 drive.

But it appeared Foles was going to work his magic again in the fourth quarter. With New Orleans leading 20-14, Saints kicker Will Lutz pushed a 52-yard field goal wide right with 3:03 remaining, giving Philadelphia excellent field position. The Eagles were taking advantage of that field position and driving with 2nd-and-10 at the New Orleans 27-yard line, when a Foles pass went right through the usually-reliable hands of veteran wide receiver Alshon Jeffery. It would’ve been an annoying drop for Philadelphia even if the ball landed on the ground, but it was particularly brutal because it landed in the hands of cornerback Marshon Lattimore.

One Saints first down later, the game was over and New Orleans escaped with a 20-14 victory (and again, that’s after trailing 14-0, so they finished with 20 unanswered points).

It wasn’t pretty, but the Saints are off to the NFC Championship Game where they will be favored against the Los Angeles Rams. And you’d have to think Sean Payton will make sure the Saints go through a serious week of practice and gameplanning in an attempt to prevent such a sloppy start from happening again next weekend.