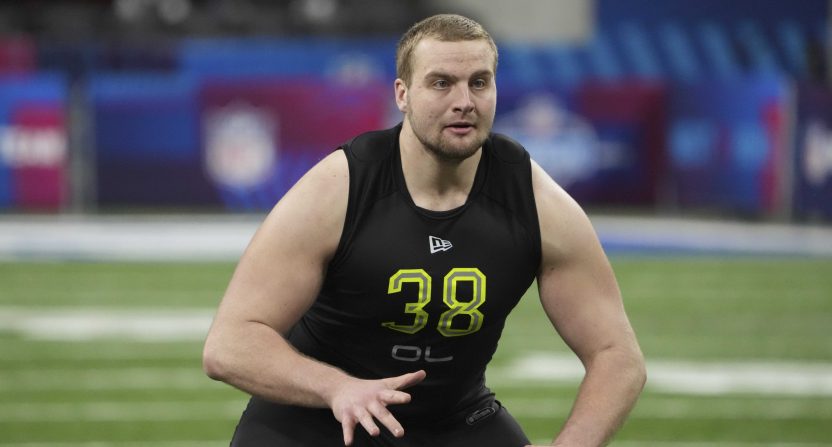 Training camp fights are a common occurrence across all 32 NFL franchises. Tempers flare under a tense environment in the heat of summer, with many players fighting for their football lives while others try to prove they belong.

That was the case for the New Orleans Saints first-rounder Trevor Penning. The rookie offensive tackle may have taken things a bit too far.

Penning — along with defensive tackle Malcolm Roach — was kicked out of practice Wednesday afternoon, Their tempers flared, which led to a fracas involving several other teammates.

A teammate came in and shoved Penning after the initial issue with Roach, causing at least 10 other players to come in from the sidelines and join in on the scuffle.

This is just one of two other fights Penning has started in three consecutive days.

#Saints rookie 1st round pick, OL Trevor Penning, has been kicked off OTAs on Wednesday after starting a fight at practice for 3 consecutive days.pic.twitter.com/ZYj5yMJcdg

“We don’t have time for that,” Allen said, per Katherine Terrell, ESPN. “I sent two guys in today and we’ve got to get our work done. We’ve got to learn as a team how to compete and how to play and how to practice and push ourselves to the limit but yet not take it over the edge.”

“It’s not unusual for something like that to occur in training camp. It’s certainly something we don’t want to see happen. It’ll be addressed and we’ll move forward.”

Penning has been known to have a bit of a mean streak coming out of Northern Iowa which he says is just a part of his game.

“It’s part of my game, I think. It’s just how I am as a player,” Penning said Monday, per Terrell. “But I’m obviously out there working technique. I’m trying to get better at the technique of the game, getting the blocks down. The finishing ability, that’s what I pride myself in, and that’s always going to be part of my game.”