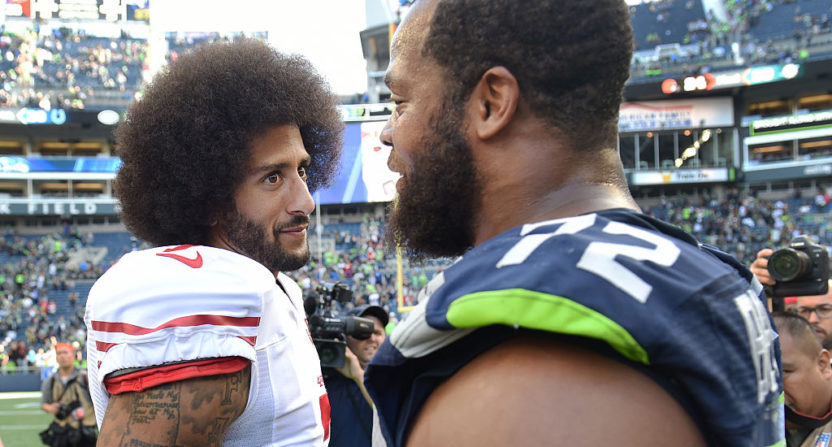 NFL preseason one week in, we’ve already seen a few NFL players protest issues of inequality and discrimination in America by refusing to stand during the national anthem, drawing inspiration from Colin Kaepernick’s actions last season. Raiders running back Marshawn Lynch and Seahawks defensive end Michael Bennett are the only two players that have been seen sitting during the anthem, but a pair of Saints veterans have taken notice and are applauding their colleagues.

On Monday, safety Kenny Vaccaro urged players to “use our platform” to make a difference.

We need to use our platform to help our situation, not be quiet. C'mon bro, it's bigger than football. https://t.co/9bwPI9NQmF

Then offensive tackle Zach Strief, who is also a union representative, told ESPN’s Mike Triplett he supports the protests as well, although he won’t use the national anthem as his forum:

“I think the reality is we have a platform. And guys using the platform I think is good. That’s part of what makes this country great is the ability to use your situation for good,” Strief said. “And guys have different feelings on what is good and what is bad and there’s always gonna be disagreements in that. And again, that’s what’s great about America is you can have that disagreement.

“We haven’t talked about what we’re gonna do. Last year, we kind of had that moment of solidarity with Atlanta, and I think that message is, ‘Listen man, we’re about everybody having a fair shot, a fair shake. Different teams, different backgrounds, different races.’ And I don’t think that that’s different than what most people want. And some guys feel that they’re going to use their platform to make statements, I’m fully behind that. I don’t know that I always agree with the way that they choose to do it, but again, that’s what’s great about America is that I don’t have to. I do agree with the message. I want equal rights for everybody. I don’t want anyone to see and experience things unfairly because of where they came from or what their race is. I don’t think most people do.

“Obviously the national anthem has become kind of a sounding board for those feelings. And it’s not the way that I would do it. But that’s not for me to judge somebody for doing. And again, if people do want to judge, then that’s part of the rights and freedoms of being American and what makes it so great.”

That’s a long answer, but it boils down to: let players express themselves how they see fit.

“It’s one of those things where we have to understand that there are people who have different viewpoints,” Goodell said. “It’s something that I think everybody wants. The national anthem is a special moment for me. It’s a point of pride. That is a really important moment but we also have to understand the other side — that people do have rights, and we want to respect those.”

But some people around the NFL feel differently. Cowboys coach Jason Garrett expressed pride in his players standing for the national anthem, according to Jon Machota of the Dallas Morning News.

Jason Garrett: "There's no question in my mind the National Anthem is sacred, the flag is sacred and our team has demonstrated that."

Garrett avoided talking about how he would react if a Cowboys player decided to sit during the anthem in the future:

“I don’t want to get into hypotheticals,” Garrett said then. “We just focus on our football team. I know it’s a great opportunity for our team before a game to sit there and reflect on the great opportunities that we have to do what we do in the greatest country in the world.”

Browns coach Hue Jackson also told Cleveland.com’s Dan Labbe he hopes none of his players sit during the anthem, although he seemed more understanding of a player’s decision to do so:

“I think everybody has a right to do, and I get it, but the National Anthem means a lot to myself personally, the organization and our football team,” Jackson said when asked about anthem protests re-emerging in the NFL following the events in Charlottesville, Virginia this past weekend. “I hope — again I can’t speak, I haven’t really talked to our team about it — I would hope that we don’t have those issues.”

As Raiders coach Jack Del Rio demonstrated with Lynch, you can disagree with a player’s decision to sit during the anthem while keeping everything in order just by being a civilized human being.

Jack Del Rio on Marshawn Lynch not standing for the national anthem. pic.twitter.com/cgZkDTwWFJ