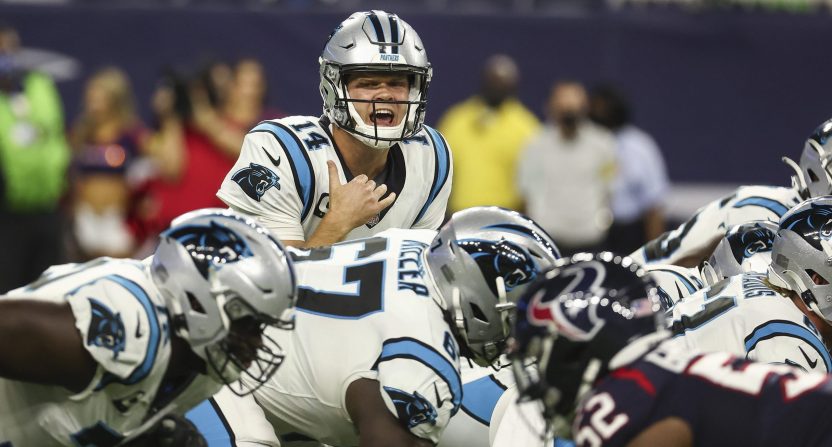 That’s the question a lot of NFL fans and media members are asking themselves following Thursday Night Football’s game between the Carolina Panthers and Houston Texans. Darnold completed 23 of 34 passes for 304 yards and rushed for two touchdowns as the Panthers moved to 3-0 following a 24-9 victory. Sure, the Texans aren’t world-beaters, but Darnold’s latest effort is matched by his previous ones this season, which includes a 305-yard, two-touchdown performance in his last game as well.

Another TD from Sam Darnold!!!

It’s quite the stunning change from Darnold’s time with the New York Jets. In his three seasons there, he rarely showed this kind of command and ability to lead a team to victory consistently. Case in point, he had just four 300-yard games in his entire Jets tenure and he already has two of them in three games for the Panthers.

Sam Darnold has won as many games in his first three starts with the @Panthers as he did in his last 13 with the Jets.

Sam Darnold is tied for the league lead in rushing touchdowns

It’s enough to make a lot of people wonder whether or not he was actually the problem all along.

We always evaluate young QBs as if their success exists in a vacuum (in a few cases, it probably would. See: Mahomes)

Sam Darnold is just the latest example that circumstances play such a huge role in most cases.

Good to see Carolina maximizing his skillset already this year.

Sam Darnold after leaving the Jets and Adam Gasepic.twitter.com/hFWVwSWip3

It’s amazing how different Sam Darnold looks with coaching, blocking and talent around him. #ThursdayNightFootball

It wasn’t all good things for Darnold, who still needs to work on his blocking capabilities…

Sam Darnold as your lead blocker is a strategy I guess, technique needs work pic.twitter.com/a6hpYFGDGH

But hey, if that’s the worst thing that the Panthers have to worry about with Darnold right now, we’re guessing they’re just fine with that. Darnold came into the season as a quarterback with something to prove and so far, he’s doing just that.