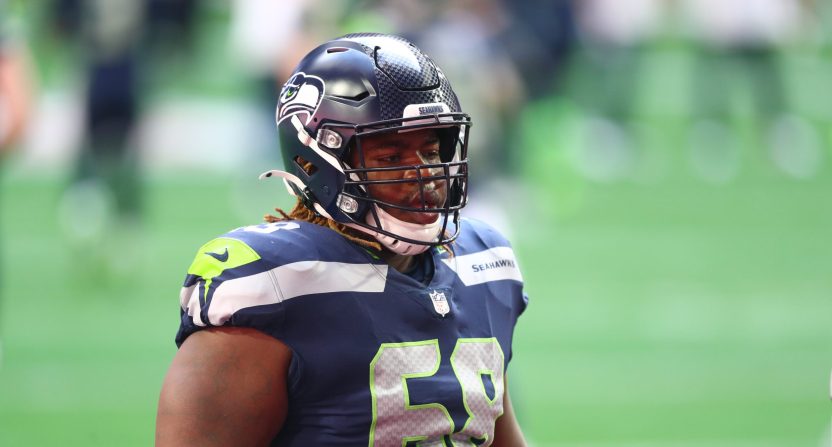 One of the most frightening moments in Thursday’s preseason game between the Chicago Bears and Seattle Seahawks came in the first half. Seattle guard Damien Lewis and Chicago linebacker Caleb Johnson were hurt on a play. And while Johnson got up and gingerly walked off of the field under his own power, Lewis was not so fortunate.

With his teammates gathered around him, Lewis was carted off of the field with an air cast on his leg. It appeared as though the third-year lineman had suffered a serious and likely season-ending injury. As it turns out, that’s likely not the case.

Following the game, it was announced (per Adam Schefter, ESPN) that Lewis’ X-rays were negative and that he had suffered a lateral strain. Seahawks coach Pete Carroll said, “We got very very fortunate there.”

The NFL world was thankful that the injury was not severe, especially considering how bad it looked.

Much better news than expected from how he looked on the ground! Prayers up for a speedy recovery. https://t.co/hqg8C5GA1w

I was so mentally resigned to Damien Lewis being out for the season that I've honestly forgotten most of how ugly this game was now that he's supposedly going to be fine.

Awesome news for our guy, glad it's nothing significant that will cost him the season. https://t.co/kwNHFZxUhy

Lewis also took to Twitter to thank everyone for their prayers, citing Philippians 4:13, which states “I can do all things through Christ which strengtheneth me.”

Philippians 4:13 Appreciate all the prayers!! 💚💙❤️

Lewis has been a fixture on Seattle’s offensive line since he was drafted in 2020. He’s started in 29 regular season games as well as one playoff game and has ranked as one of the best run-blocking guards in the league since he debuted.

It’s of course worth noting that while the injury isn’t as bad as it originally appeared, Lewis will likely miss some time. That will depend on how severe the sprain ends up being. But even if he’s forced to miss a few weeks, that’s a lot better than what it looked like it would be when the injury happened.