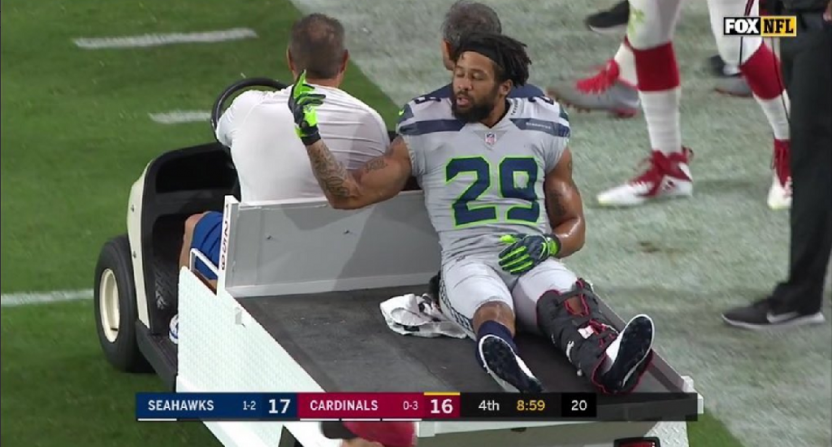 Seattle Seahawks safety Earl Thomas didn’t end his holdout until the NFL preseason was over, in search of a contract extension. It’s gotten ugly enough between Thomas and the Seahawks that trade rumors have continued over the last few weeks (particularly with the Dallas Cowboys), and he even skipped two recent practices (which the Seahawks fined him for).

Despite the contract dispute, Thomas has still been playing for the Seahawks, and has looked like his usual All-Pro self, with three interceptions on the season.

Earl Thomas’ reaction after being carted off the field. pic.twitter.com/Lpqgu7rJJ9

Earl Thomas leaving the field looking across the field to the Seahawks sideline. pic.twitter.com/aoIkUYu88f

So, now Thomas definitely isn’t getting that contract extension anytime soon, and he’s definitely not going to be traded to another team anytime soon. While flipping off his own team isn’t a great look, it’s easy to understand his frustration here. This is exactly why players are in search of long term financial security in a league that can cause serious, career-threatening injuries at any moment.

Earl Thomas’ contract expires after this season. So today possibly was the last game he played with the Seahawks. Thomas will be free to go where he wants this winter when he becomes a free agent. https://t.co/JJzjgn40Lk

And Earl Thomas is down and getting carted off with a cast. Exactly why he wanted to get paid. And why no one — NO ONE — should criticize a player wanting to get his when he can.

What an asshole Earl Thomas was for wanting money beyond this season commensurate with changes in the market that reflect his value. How selfish.

THIS is why Earl Thomas held out for his money. For those of you too narrow minded to understand the reality of the NFL. Let this picture tell you what words never could. pic.twitter.com/I9bbnXXnyS

As for what this means for the Seahawks, well, their secondary just got a whole lot worse. Game-changing playmakers like Thomas are very hard to find and opposing quarterbacks will attack the Seattle secondary with a bit more confidence going forward.