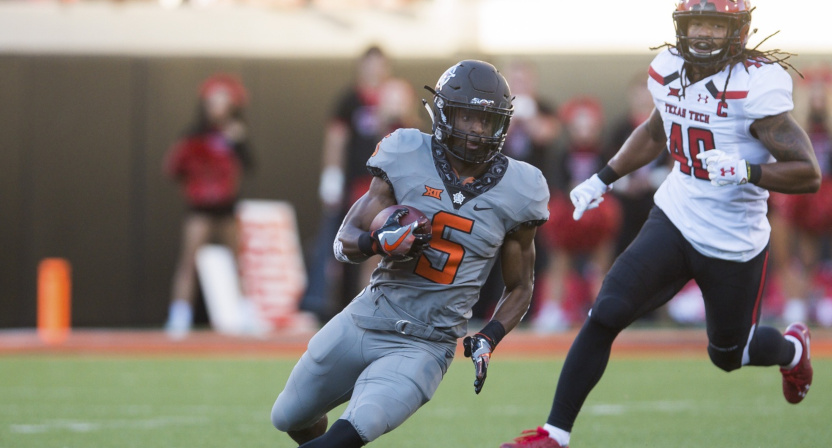 One of the stranger NFL stories in a while comes from the Seattle Seahawks, who waived rookie cornerback Kemah Siverand Tuesday. That in and of itself wouldn’t be that noteworthy for anyone who didn’t follow the Seahawks closely; they only signed Siverand as an undrafted free agent in May (following his time at Oklahoma State and Texas A&M), and undrafted free agents are cut all the time, especially ahead of roster deadlines (teams have to get down from an off-season roster size of 90 to a roster of 80 by this Saturday, and to an active roster of 53 by September 5). But on Thursday, NFL Network’s Tom Pelissero reported the details of why Siverand (#5 above in a 2018 game against Texas Tech) was cut, and they’re, uh, quite unusual:

The woman was wearing #Seahawks gear in an attempt to disguise her as a player, I’m told. It did not work.

There’s no word on exactly how “wearing Seahawks gear in an attempt to disguise her as a player” worked. Former Oakland Raiders CEO and current CBS Sports analyst/BIG3 executive Amy Trask had a good line on it, though:

If she woulda dressed as @MoneyLynch and stood on a marker that said “1 yard line,” they woulda ignored her. https://t.co/UApgklQZ3w

And this does get funnier still with Siverand’s most recent retweet:

Put God 1st and everything else will fall in place.

I know my time is going to come, it always has, patience ain't easy but this life isn't for just any somebody… Rome wasn't built in a day.

If only perhaps he had exercised a little more patience here, at least until a time when he was no longer under training camp team hotel restrictions. In any case, ESPN’s Brady Henderson confirmed with a source that Siverand “was caught on video trying to sneak a woman into the team’s hotel.” And NFL.com’s Nick Shook has some context on how this flouted the team’s COVID-19 prevention measures, and on how some NFL players have been punished for this (albeit perhaps without “attempts to disguise her as a player”) in the past:

Siverand’s attempt to welcome a visitor into the team hotel was a violation of team rules, especially during a camp that is operating amid the ongoing COVID-19 pandemic. With outside contact expected to be at a minimum if at all, jeopardizing the rest of Seattle’s team by inviting an outside visitor into the team’s hotel was a violation the Seahawks could not overlook.

Even in a regular, non-pandemic camp setting, players are usually forbidden from welcoming visitors to team hotels or dorms. Former Maryland receiver Deon Long was cut for a similar transgression during the Rams’ 2016 training camp, which was shown on the 2016 season of Hard Knocks.

Look, there are plenty of stories about wild training camp escapades, especially from the earlier days of the NFL; Peter Richmond’s Badasses (on John Madden’s Raiders) and Jeff Pearlman’s Boys Will Be Boys (on the 90s Dallas Cowboys) have some particular ones of note. And this is far from the worst thing a NFL player has been accused of, and this probably wouldn’t have led to a direct cut if the player involved was a star rather than a recently-signed undrafted free agent who might well have been a training camp cut in any case, as was the case with both Long and Siverand. But the whole sneaking a woman into a team hotel thing takes on a different dimension in a COVID-19 era, and it made this a pretty easy cut for the Seahawks.