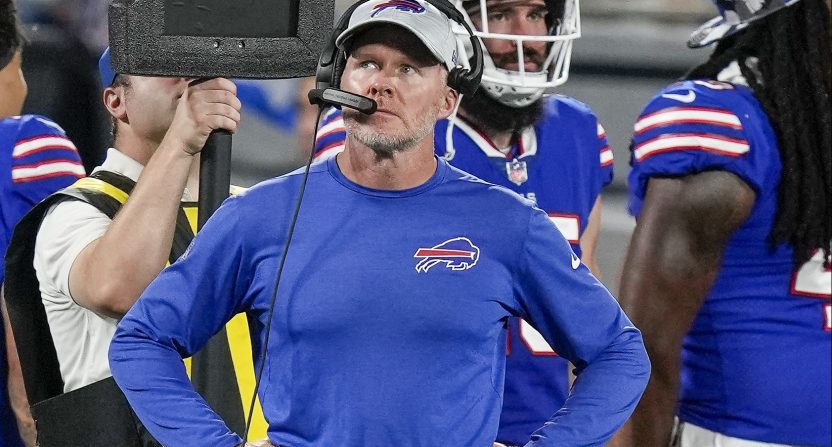 The Buffalo Bills played the Carolina Panthers in a preseason game on Friday night but that was overshadowed by the horrific details surrounding a civil lawsuit made against Bills punter Matt Araiza on Thursday.

On Thursday, a civil lawsuit was filed that accuses three San Diego State football players, including former player Araiza, who is now the Bills punter, of gang-raping a 17-year-old girl at an off-campus party in 2021.

The Bills released a statement on Thursday saying they were aware of the allegations and collecting more information.

Before the Bills-Panthers game, it was reported that Araiza would not punt and wouldn’t even dress. The decision and the situation around it were discussed during the Bills’ TV broadcast as well.

"It's ongoing and, quite frankly, it's completely unsavory for all of us." – @SteveTasker89 pic.twitter.com/VEYQIGIiYN

“Certainly, not surprised that there’s gonna go without that punter tonight,” said commentator Steve Tasker, who couldn’t even bring himself to say Araiza’s name. “It’s ongoing and, quite frankly, it’s completely unsavory for all of us. I’m glad the ball is gonna get kicked off right about now.”

Carolina won the game, 21-0, but that was beside the point. Afterward, Bills coach Sean McDermott took to the podium with a clear understanding that he was going to have to discuss the situation and whose decision it was to not let Araiza play.

“Okay. I know there was a game just played, but I want to talk about something that’s more important, which is what we have going on with one of the members of our team right now. With Matt Araiza. It’s an extremely serious… just hard to go through. It’s not a situation that I or we take lightly whatsoever. It’s very serious. I understand the sensitivity of the situation, and it’s clear that we have work to do continue to figure this thing out here. And we’re going to do that.”

Araiza was accused in a lawsuit of gang raping a 17-year-old girl when he was at San Diego State last year.

When asked if he was satisfied with the way the franchise was handling the situation, he said “we have work to do.”

Sean McDermott said that he did not want to get into when asked if Matt Araiza will be on the roster Tuesday.

When asked whose decision it was that Araiza wouldn’t suit up, McDermott said, “it was my decision. And at the end of the day, I didn’t feel like it was right.”

Asked Sean McDermott if he felt like Matt Araiza lied to him and the team: "Yeah, I'm not gonna get into that. Again, respectfully it's working on finding that truth and that's where we're at with it."

McDermott didn’t want to discuss details around when the Bills were aware of the allegations against Araiza, which appear to have been an open secret around the San Diego State campus. He did, strangely, offer “thoughts and prayers” to “the people involved.”

“I can tell you this: My heart, and my thoughts and prayers, go out to the people involved,” McDermott then said. “And that includes Matt. It includes both sides here. The victim, and everyone involved. Our prayers go out to them.”

There are certainly two ways to view the press conference.

On one hand, you could make the case that McDermott showed more humanity and honesty than anyone involved with the Cleveland Browns and Deshaun Watson situation. While he certainly deflected some questions, he also seemed to be genuinely affected by the details in that lawsuit and what they could mean about Araiza.

On the other hand, throwing out “thoughts and prayers” to people on “both sides” of a rape accusation reads tone deaf. The fact that Araiza is still traveling with the team is a statement all its own, and any minimization of the accusations against him is a bad look right now, even if we come to learn different details in the days ahead.

The reactions from around the NFL world to McDermott’s presser certainly ran the gamut between those two readings.

Sean McDermott, while not getting too deep into the weeds, is clearly upset by the Araiza situation.

Very good article and what I was speaking to earlier.

NFL, team, organizations and media need to do better.

If we aren't advocates, we are enemies. https://t.co/Ae5UOabXCA

I mean I don’t know what I was expecting from McDermott, but this certainly isn’t the comment you want. https://t.co/MPxXNNzX9L

Just my opinion, but Sean McDermott seemed clearly bothered not only by the allegations but also the way this was handled within the organization. McDermott will never throw anyone under the bus but clearly has some inner conflict right now and has frustrations he can’t say yet.

Sean McDermott admits there are some things he has learned about the Matt Araiza situation just over the last 24 hours.

Once again says he needs to keep working to find the truth.#Bills

It certainly sounds like the Bills are mulling over what to do with Araiza, who is currently the only punter on the team and their No. 1 holder on field goals. But sometimes, there are more important things to worry about.