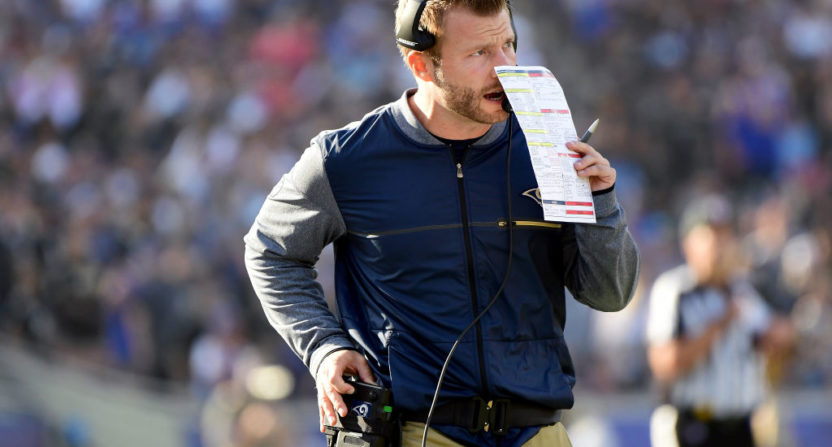 Since helmet radios were officially approved in 1994 (almost four decades after the Cleveland Browns first experimented with them), the general process of NFL play-calling has been a head coach or offensive coordinator giving the quarterback a play over his headset, then the quarterback making adjustments at the line of scrimmage based on how the defense lines up. That’s been required thanks to the cutoff of headset radios at the 15-second mark. But Los Angeles Rams’ head coach Sean McVay appears to have  found a way to personally call audibles, getting his offense to line up much faster than normal and then getting audibles in to quarterback Jared Goff before the headsets are cut. Mark Bullock, who writes for the Washington Post’s Insider blog, appears to have been the first to notice McVay providing Goff with audibles on a NFL Sound FX clip from a couple of weeks ago:

This is the SoundFX clip I mentioned earlier. Listen out for McVay calling the audibles in the headset before Goff calls them https://t.co/rvT76HnYNw

"You know how many points we're averaging per game? 32.9.
How many did we score today?" – @JaredGoff16 ?@RamsNFL #LARams#SoundFX pic.twitter.com/EHO4NvPDvW

And this is far from a one-play deal. As others have gone on to note, the Rams have done it regularly:

Ever since @MarkBullockNFL pointed out that McVay is calling audibles for Goff I can't help but note the play clock on every snap.

This stuff about McVay getting his offense to the line with 25 seconds on the clock so he can relay audibles is an amazing edge: https://t.co/p8vdRjEY9H https://t.co/yseMiX9anZ

I was blown away when I read this in @MikeSilver’s piece a couple of weeks ago. Goff is taking McVay’s brain to the line of scrimmage https://t.co/wGG5f2ESDz https://t.co/4imi5oKVAC

Here’s another video of McVay relaying information once the Rams are lined up:

There are some clear advantages to this, as it shifts the burden for identifying coverages and needed changes from the quarterback to the offensive playcaller, and that’s perhaps particularly important with a relatively young quarterback such as Goff. That might lead to this system being adopted further by other teams, and it certainly seems like a better idea than the various reported attempts to circumvent the 15-second cutoff. Having the playcalling coach involved once he’s seen how the defense lines up carries positives, especially as that coach has been tightly studying defensive alignments, has a sheet of potential audibles to consult, and has a wider perspective than the man under center.

But there are downsides to this approach too, and reasons that teams haven’t uniformly done this. Getting your team to the line this consistently early in the play clock requires plenty of effort in its own right, essentially playing a hurry-up offense without an early snap. Also, audibles at the line aren’t always heard and executed perfectly, especially when receivers are spread out wide. That can be a big challenge with audible-intensive approaches. Establishing this kind of consistent system could also create problems in the cases of communication breakdowns, whether sinister or not; if the quarterback isn’t empowered to change calls himself, what happens if he can’t get the call from the coach?

Still, this seems to be working well for the Rams, who are second in the league with 29.9 points per game and fourth with 379.0 yards per game. We’ll see if others follow them here.