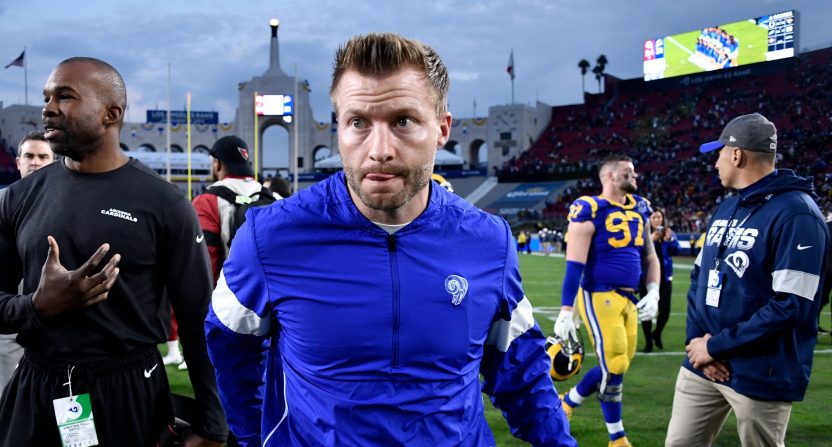 There’s been a whole lot of discussion that Los Angeles Rams coach Sean McVay might “retire” (read: walk away from coaching that team for a few years, perhaps take a media job, then eventually return to coaching somewhere) at 36 following Super Bowl LVI. That started with McVay’s comments during his final pre-game presser Friday, which ESPN’s Nick Wagoner wrote up here:

McVay doesn’t yet have the answer to the ideal work/life balance but he made it known during his team’s final media availability before Sunday’s Super Bowl LVI that it’s something that has been on his mind.

Moments after answering a question by saying he “won’t make it” if he’s coaching until he’s 60, McVay was asked why he didn’t think that would be the case. McVay, 36, started his response by saying he was joking but then gave a roughly 90-second answer on the other things he wants to pursue in life.

“I love this so much that it’s such a passion but I also know that what I’ve seen from some of my closest friends, whether it’s coaches or even some of our players, I’m gonna be married this summer, I want to have a family and I think being able to find that balance but also be able to give the time necessary,” McVay said. “I have always had a dream about being able to be a father and I can’t predict the future, you know? I jokingly say that.

Wagoner also notes there that his ESPN colleague Lindsay Thiry had heard “from multiple sources in the past and again recently that McVay has considered working as a television analyst as an alternative to coaching,” and that his other ESPN colleague Jeremy Fowler wrote in a predictions piece in January that McVay was getting discussion as a candidate for TV jobs (along with other then-active coaches Sean Payton and Pete Carroll; Payton has since left coaching, and seems likely to take a TV job). So this wasn’t just about these particular comments.

But even with that, McVay’s comments there certainly left room for some discussion about if he was looking to make a quick move. And some outlets that wrote them up (maybe particularly Sports Illustrated‘s The MMQB, but others as well) translated those comments (and the previous “sources” discussion from ESPN) into a move coming perhaps as quickly as after this Super Bowl. That led to headlines like The MMQB’s  “Sean McVay Still Unsure About Future as Rams Coach,” and that’s certainly a big deal ahead of a game like this; it would frankly be quite incredible if McVay walked away from coaching at 36 and after appearing in (and possibly winning) a Super Bowl, but his comments and the other previous sourced discussion didn’t rule that out. McVay did specifically rule out an immediate exit Saturday evening in a text message to NFL Media’s Ian Rapoport, though:

From @NFLTotalAccess: No, #Rams coach Sean McVay won't be walking away after the Super Bowl. He texted me, "I’m committed to this team and coaching." pic.twitter.com/Mt9NImDf4f

That doesn’t specifically mean any of the previous reporting here was factually incorrect. The actual on-the-record comments inspiring some doubt came from McVay himself, and he should have known being that vague about his future would lead to this kind of speculation. (And even there, it’s worth observing how this shifted from original reports to other outlets aggregating those reports; the ESPN headline of “Los Angeles Rams coach Sean McVay ponders future, says he wants to prioritize time with family” had the most convincing reporting that McVay might at some point (and perhaps even this offseason) head to TV, but it was then aggregated elsewhere with stronger headlines suggesting this was maybe imminent, and with those not coming with any further reporting. And that probably led to McVay feeling he needed to reach out with a statement that he wasn’t currently retiring.

Again, the base idea here of McVay taking a break from coaching at some point is far from out of the question. Beyond those sourced reports from ESPN’s Fowler and Thiry, there’s what McVay himself has said about the pressure coaching places on him, about his desire to spend more of his time on his family, and about how he’s not committed to being a continuous head coach forever. But there’s a difference between that and the recent discussions that this Super Bowl might be his final game as Rams’ head coach.

And while working in TV is absolutely appealing (perhaps especially with the remarkable top booth volatility we’re seeing right now) and comes with less weekly time commitment, it would be something for McVay to leave for it right now, especially at a moment where he and the Rams’ GM (Les Snead) seem to be working so well together in building a top roster (as illustrated in a solid feature from The Athletic’s Jordan Rodrigue this week), and where that roster has him coaching in his second Super Bowl in three years. So while some of the speculation here is understandable, especially given McVay’s own previous vague comments, him leaving right now was always going to be a long odds play. But it’s appreciated that McVay took the time to damp out that very specific rumor, and that probably will make for a much better Super Bowl broadcast than one that had to consider the possibility of one team’s coach soon leaving that role.