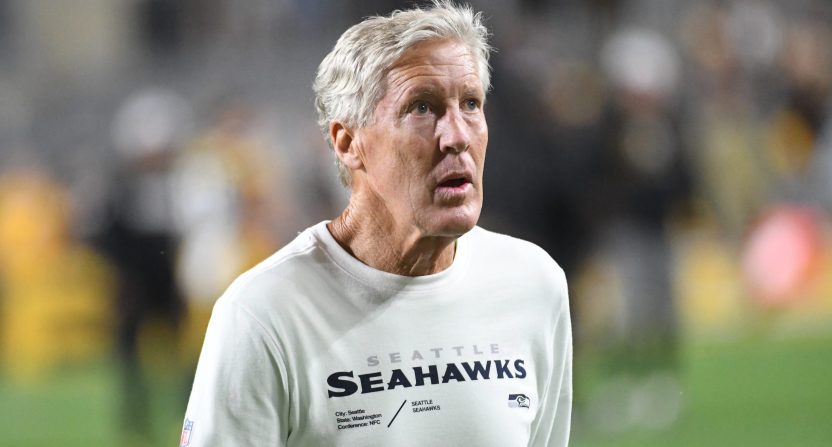 After trading Russell Wilson over the offseason, the Seattle Seahawks’ quarterback situation doesn’t look good on the surface, with Geno Smith and Drew Lock (acquired in the Wilson trade) in a training camp battle for the starting job.

While most of the football world sees it as the Seahawks having two backup quarterbacks, Seattle head coach Pete Carroll paints a rosy picture on the situation.

Carroll told the Seattle media on Tuesday that the Seahawks “may have two number ones” at quarterback in Smith and Lock.

Pete Carroll again going on how well Geno Smith has handled this Seahawks QB competition, how well Drew Lock has practiced and played.

“We may have two number ones.” pic.twitter.com/Bf7hgdA99L

Carroll added that the Seahawks initially hoped to have the starting quarterback decided after Friday’s preseason finale against the Dallas Cowboys, but Lock recently got COVID and that has delayed Seattle’s decision. Now, it appears the competition could go into September.

Pete Carroll says Seahawks’ original plan was to have decided their new starting QB with the end of Friday preseason finale at Dallas. But Drew Lock getting COVID last week, which makes this week a do-over for him, has changed their plans.

As the old football saying suggests, “If you have two quarterbacks, you have none.”

Now, sometimes there’s a highly-regarded young quarterback in a battle with a veteran quarterback.

But in Seattle’s case, it’s a 31-year-old (Smith) who has a 77.5 career passer rating and last started more than three games in 2014, vs. a quarterback (Lock) who’s disappointed in his first three NFL seasons (79.3 passer rating).

We have a lot of information that suggests Smith and Lock are quarterbacks much better off as No. 2s than No. 1s- and especially for any team that has hopes of competing. The Seahawks currently have the third-worst Super Bowl odds at 150-1, according to FanDuel.

Oh- and the Seahawks will be facing Wilson and the Denver Broncos in Week 1.

Here’s a look at how NFL fans have reacted to Carroll saying that the Seahawks “may have two No. 1s” at quarterback:

Pete’s pretty dug in on this. https://t.co/AixfKg8cL5

Pete is correct. Two number ones in next year's Draft. That's what the Wilson trade resulted in. https://t.co/0tcV4Qtqhe

Worst QB situation in the #NFL. Had to be hard to say w a straight face. #Seahawks https://t.co/MkPgor1Es0