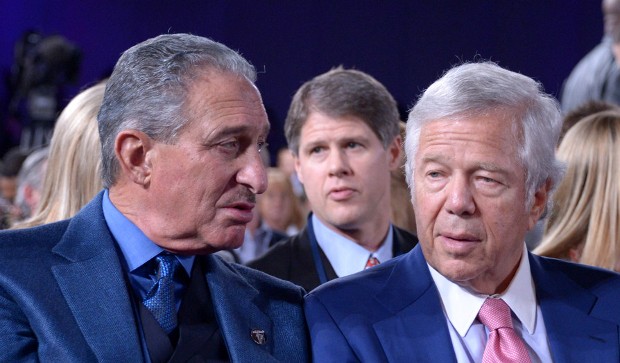 Come Sunday, a new NFL champion will be crowned when the New England Patriots face the Philadelphia Eagles Super Bowl LII. In addition to taking home the Lombardi Trophy, the winner will add a key piece of jewelry this offseason with a championship ring commemorating the accomplishment. Such jewelry is typically custom-designed to celebrate a world title with elements in the design that note aspects of that particular season or the franchise’s history.

To the victors go the spoils, and sometimes that means including an in-joke among the team or a reference that’s become part of the cultural conversation. For instance, the Atlanta Falcons blowing a 28-3 lead in Super Bowl LI to the New England Patriots, which became a running joke after the game and throughout the subsequent season.

Falcons owner Arthur Blank took some exception to the design of the Patriots’ championship ring from Super Bowl LI, which featured 283 diamonds in its design. Gee, what could that be referring to?

Patriots confirm that there are 283 diamonds in new champ ring. They were, of course, down 28-3. pic.twitter.com/XkVW5669an

In an interview with The New York Times, Blank recalled an interaction he had with Patriots owner Robert Kraft in which he let his colleague know that the joke wasn’t very funny.

How serious Blank was about this wasn’t confirmed. Maybe he really was offended or perhaps the two laughed it off. But really, Blank has no gripe to stand on. The Patriots didn’t have to consult him before deciding on the final design of their Super Bowl rings.

Besides, the Patriots are far from the first team to use their championship bling to rub some salt on the wounds of their rivals. The championship ring burn has become a bit of a staple as ring designers look for any way to work in an element that takes a veiled or not-so-veiled shot at an opponent.

This is part of the championship ring’s evolution. What used to be a souped-up version of a class ring has grown to double or triple the size over the course of sports history, leaving more room for creativity in their design.

One recent troll job seen on a championship ring came in 2016 when the Cleveland Cavaliers celebrated their own historic comeback in the NBA Finals against the Golden State Warriors. After battling back from a 3-1 series deficit, the design of the Cavs’ championship rings made sure to show off the series results along the way, which some viewed as a reference to how the Warriors blew a 3-1 lead in the NBA Finals.

Similarly, the Pittsburgh Penguins had the results from each playoff round on their way to a Stanley Cup championship last year engraved on the inside of their rings. While there were no comebacks like the Patriots or Cavaliers had, it still left the door open for some sick burns anyway.

In the future, we may see more troll jobs in various championship rings at the professional level. But the game has been played in college for the past few years as well, especially in rivalry-fueled football. In 2014, Florida State handed out ACC championship rings to the football program, along with some other jewelry. After scoring victories against in-state rivals Miami and Florida, Seminoles players and coaches also received state championship rings.

The State Champion and ACC Champion rings have arrived at #FSU! #MoreBling pic.twitter.com/v2I5Mw36N3

For Florida State, winning a national championship ring that season clearly was not enough. As ACC champions, they also earned rings for that accomplishment. But a state championship ring added to the lore of in-state rivalries with the other prominent programs in Florida. Fans and players from Miami and Florida took offense to Florida State making such a piece of bragging rights material. But what’s the fun of having in-state rivalries if you can’t boast about winning, especially with some well-designed bling paid for by the school?

Georgia Tech pulled a similar stunt with a state title brag after notching victories against Georgia on the program’s Orange Bowl championship rings in 2015. For Georgia Tech, the ring was in response to Georgia’s program running with the motto “We Run This State.”

“We just copied Georgia,” Georgia Tech head coach Paul Johnson said of the ring design, according to the Athens Banner-Herald. “They’re the guys who started ‘We Run This State.’ We just kind of played off of that.”

And then there is the obvious, in-your-face bragging rights. When Michigan State designed their rings for winning the Cotton Bowl in 2015, the ring design incorporated the final score of their victory over Michigan, a 35-11 whooping. No subtlety here. The score was just part of the design without hiding behind any easter eggs.

If you have earned the right to receive a ring for winning a championship, then you have also earned the right to create a design that will be remembered for years by the players and coaches who took part in those moments. If you are on the losing end of those occasions, that’s on you. Just like a touchdown celebration, if you don’t want your opponent to use you as ammo on the championship ring, beat them and prevent the opportunity to design a ring in the first place.