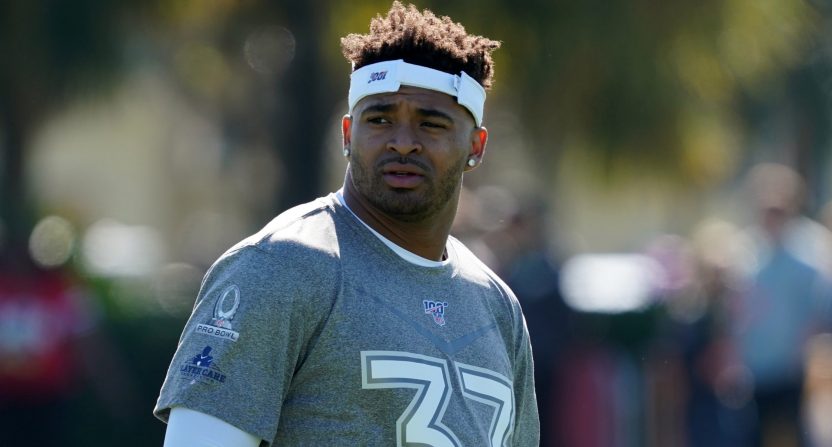 New York Jets All-Pro safety Jamal Adams has requested a trade and has named eight specific teams that he “would welcome a trade” to. The problem is that several of those destinations don’t make a lot of sense. Meanwhile, teams not listed by Adams would make great fits.

Here are the seven best fits for the 24-year-old…

The Eagles don’t have a lot of cap flexibility beyond this season, but they’re all-in with a league-high nine players who make at least $10 million per year. Might as well maximize your chances to compete right now, even if it forces you to make some tough decisions in a couple years. The good news is Philly’s core is generally locked up long-term, and the Eagles could definitely use the help at safety in the wake of Malcolm Jenkins’ departure. This is unlikely, considering their impending 2021 cap crunch and their acquisition of Darius Slay, but it’s not out of the question.

The Cardinals are prepared to make a run with DeAndre Hopkins joining Kyler Murray and Kliff Kingsbury on offense, and Isaiah Simmons joining Chandler Jones and Patrick Peterson on defense, but they still need as much firepower as possible in the loaded NFC West. With Simmons apparently penciled in at linebacker, they could use a talent boost next to Budda Baker at safety. Money is a little tight right now, but Peterson and Larry Fitzgerald are both slated to come off the books next year.

Adams would be a considerable upgrade over Kenny Vaccaro, the Titans should be in win-now mode after making a surprise run to the AFC Championship Game in 2019, and Tennesse has the cap space to pull this off.

The Lions have dealt away Darius Slay and Quandre Diggs in the last year, leaving their secondary in flux. But Adams is younger and could be cheaper than Slay (for now) on a long-term deal. “For now” is all that matters when you’re trying to finally experience some playoff success with aging but capable quarterback Matthew Stafford, who’s healthy now and was having the best season of his career before suffering a campaign-ending back injury in 2019.

Adams didn’t mention Arizona, Tennessee, Detroit, or Cleveland because they aren’t conventional winners or hot-spot destinations, but all have the talent to win right now. In fact, the Browns might be one of the five most talented teams in the NFL. Most critically, Cleveland leads the league in salary-cap space and could use help at safety.

This is the obvious top fit from Adams’ initial seven-team list, mainly because the Cowboys were in on Earl Thomas last year and have been in need of a standout safety forever. Adams admits he’s “trying” to land in Dallas, where Jerry Jones has to be desperate after 24 consecutive seasons without an NFC Championship Game appearance. And while the Cowboys have HaHa Clinton-Dix joining Xavier Woods on the roster, both are better-suited as free safeties.

This is the team Adams added to his list after that initial report emerged, and it actually makes the most sense of all. It’s all about 2020 and maybe 2021 while the Bucs try to make a sudden run with aging centerpieces Tom Brady, Rob Gronkowski, Ndamukong Suh, and Jason Pierre-Paul. Might as well put all of your chips in the middle by adding a game-changing defensive back. And the good news is Tampa is scheduled to be flush with cap space next offseason, so it can afford to pay up for Adams.