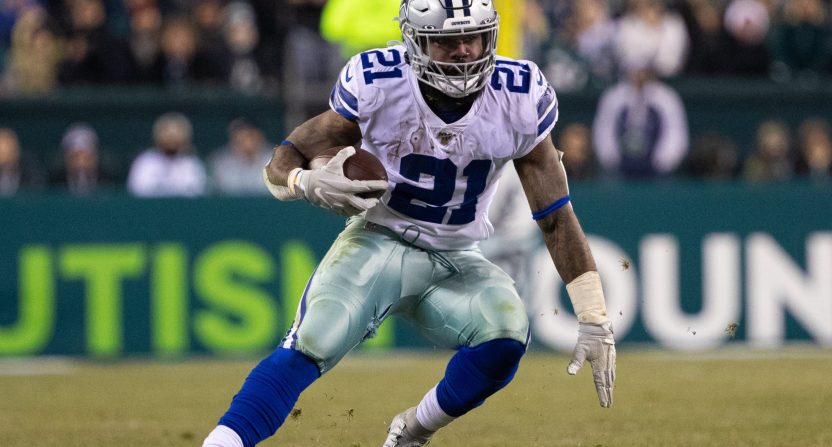 With just over a month away until training camp, it’s been revealed by NFL Network’s Ian Rapoport and Tom Pelissero that “several” players from the Dallas Cowboys and Houston Texans tested positive for COVID-19 and that one of them was Ezekiel Elliott. Rapoport tweeted that Elliott’s agent confirmed the news and said that “Elliott is feeling good.”

Several #Cowboys players & several #Texans players have tested positive for COVID-19 recently, sources tell me & @TomPelissero. None of the players are believed to have been in their team facilities. The teams followed proper health protocols.

#Cowboys star RB Ezekiel Elliott is one of the players who has tested positive for the Coronavirus, his agent Rocky Arceneaux confirmed to me. Arceneaux said Elliott is feeling good.

The important note is that reportedly none of the players were at team facilities so there’s no risk of that spreading throughout the team. Still, it’s strange that multiple players from two teams in the same state tested positive at the same time.

As things start to open back up due to the COVID-19 pandemic, there is bound to be an uptick in positive cases. While some states have taken a slow and cautious approach, Texas is a state that has reopened faster than others and as of a June 3 executive order, many non-essential businesses have reopened at 75 percent capacity with many health protocols made “recommend” instead of being mandatory.

This has resulted in a kind of “Spring Break” mentality where people being cooped up for a few months are making up for lost time with many likely not wearing masks. So now there’s a rise and if it gets too bad, there may possibly the return of stay-at-home orders like what Houston is reportedly considering. If you were thinking of making a wager via online football betting, now would be the time to bet on Dallas, since their odds to win the championship have gotten worse, and the payouts have increased.

The NFL’s chief medical officer noted that cases among players and team officials was expected to rise and the NFL is trying to keep things under control. The problem is, the public doesn’t have things under control and most people act like spoiled children when they don’t want to wear a mask or employ social distancing in public. If the numbers keep climbing at a more rapid rate than it has been, it’s just going to take longer and longer before fans can attend and that’s if we still have sports.