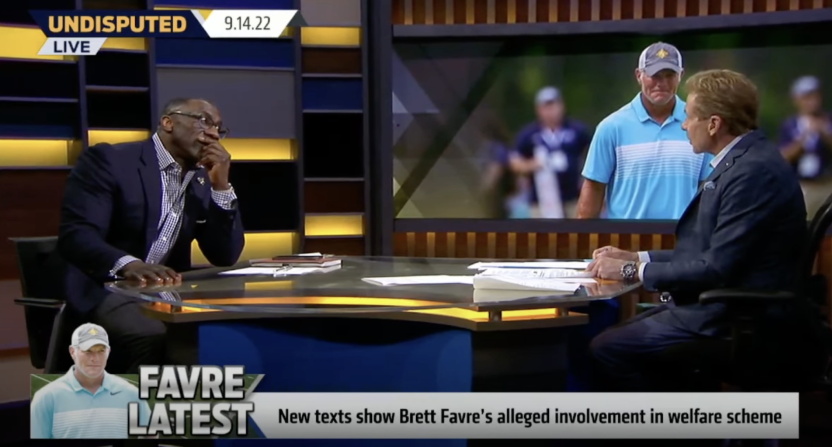 Shannon Sharpe and Brett Favre met as opponents in Super Bowl XXXII. Now, they’re on opposite sides once more as the Denver Broncos legend unloaded on the former Green Bay Packers quarterback over the disturbing details emerging around a Mississippi welfare fund scandal.

Thanks to the reporting of Mississippi Today, we’ve learned a lot over the last year about former Mississippi Governor Phil Bryant and schemes to redirect millions in subgrants from the Mississippi Department of Human Services welfare department to people and organizations that appear to have been supportive of his campaign or administration. One of those people is Brett Farve, who appears to have benefited in various ways, including over $800,000 in “speaking fees.” Favre reportedly repaid around $600,000 but not the rest, which was considered interest.

The former Packers star also wanted a $3.2 million grant to a drug company that he was an investor in from the former Mississippi governor, to whom Favre said in texts that he would like to award shares in the drug company while he was still governor.

It was also known that Favre had lobbied the governor for $5 million to build a volleyball arena at the University of Southern Mississippi where his daughter played.

The NFL legend has long denied that he had any knowledge of where these millions of dollars come from. That claim appears to have been debunked as Mississippi Today published text messages between Favre and Bryant that clearly show the NFL star was trying to shield himself from the source of the funds ever getting out.

Brett Favre: Will the media find out that we're using welfare funds intended to help the poorest residents of America's poorest state to build a volleyball center?

While much of this was well-known before this week, the revelation that Favre actively knew he was taking money intended for poor people, in the poorest state in America, so that he could build a volleyball arena at his alma mater, seems to have pushed it into a new level of anger and shaming. Even the guy who wrote the book on Favre now says “he’s a bad guy.”

Sharpe also laid into Favre during the latest episode of Skip and Shannon: Undisputed on FS1, inferring that the Hall of Famer got away with way more than some of his Black counterparts would have even been allowed to.

You have to be a sorry mofo to steal from the underserved pic.twitter.com/3oIhDABo8P

“I talked to people that was in the room when Brett Favre went to the Hall of Fame and nobody mentioned about text messages that he sent to that Jets masseuse. Nobody mentioned anything about the [painkiller] addiction that he suffered from. But yet, [Terrell Owens], they brought up everything. Can you imagine, if T.O. would have had an incident — incidents — like Brett Favre off the field? T.O. still, to this day, right now, would not be in the Hall of Fame. Yet they walked right past it like Brett Favre did nothing.

“The problem that I have with this situation. You got to be a sorry mofo to steal from the lowest — Mississippi is the poorest state in our country.

“When Black and brown people do defraud the government, they hellbent. You get an EBT card and you get WIC and you get stuff like that. Boy, they move heaven and Earth to try to put you in jail for 400 little measly dollars. Now, this man took a million dollars. They sittin’ around, like, well, it happens and we’ll see…

Sharpe saved his biggest shot for the end.

The biggest criminals, the people that still the most, look like that,” said Sharpe, referring to Favre. “But he’s been a sleazeball. He’s been shaky. For a very, very long time.”

Don’t expect these two to mix it up at the next Football Hall of Fame banquet.