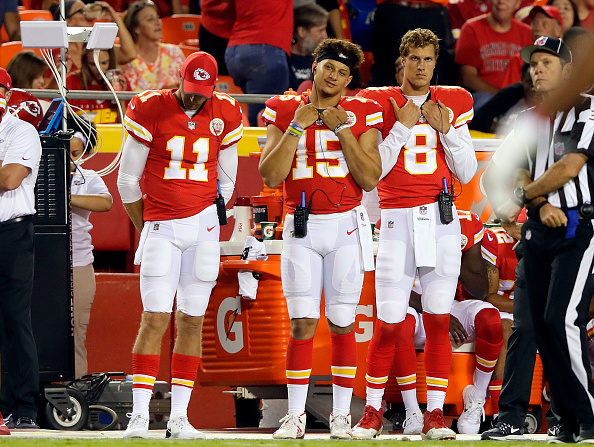 Because the AFC is so top-heavy with the 9-2 New England Patriots and the 9-2 Pittsburgh Steelers seemingly on a collision course for a matchup in the conference title game, the rest of the conference is desperate.

We saw evidence of that a couple weeks ago, when the Buffalo Bills benched quarterback Tyrod Taylor in favor of rookie fifth-round pick Nathan Peterman, despite being in control of a playoff position. They were sliding coming off back-to-back losses and looking for a jump-start, but that decision backfired when Peterman threw five interceptions in the first half of a one-sided loss to the Los Angeles Chargers. And now the Bills have gone back to Taylor.

The difference is that Kansas City has a little more clout after that hot start, and so does Alex Smith. The veteran has put in a lot more time than Taylor has in Buffalo, and was a legit MVP candidate early in the season. It’s possible this is a slump, and Smith can recapture the magic that had him suddenly dominating on deep balls while putting up All-Pro numbers until mid-October.

Plus, like Taylor, Smith isn’t the only thing that’s wrong with his team’s offense. Running back Kareem Hunt looked to be running away with the offensive rookie of the year award during the first five weeks of the season, but has disappeared while in a search for any sort of hole behind an under-performing offensive line.

“I think it’s not just Alex,” Chiefs head coach Reid said Wednesday, per the team’s official website. “I think people do that, and I told you that I’ve got to get better at doing my part. Each position has got to do better. This is a team game and so everybody has a piece of the pie. You’re bringing it to Alex [Smith]. I’m bringing it to all of us doing a better job. Alex is part of the team so he’s included in that. But it’s surely not just one person.”

But here’s the thing: Smith’s rookie backup, Patrick Mahomes II, is a much better prospect with a much higher ceiling than Peterman (and Taylor and Smith, for that matter). We’re talking about a top-10 draft pick who passed for over 10,000 yards during his final two seasons at Texas Tech, and lit up opposing defenses with a completion percentage of 63.0, four touchdowns to zero interceptions and a 109.3 passer rating in the preseason.

It’s easy to understand why the Chiefs might fear pulling a Sean McDermott, but they might want to consider what happened when the San Francisco 49ers replaced the very same quarterback with a young gunslinger in 2012. Colin Kaepernick entered the lineup in favor of an injured Smith in November and dominated during the second half of that season, helping the 49ers reach the Super Bowl.

Kaepernick might have been a little more developed at that point (he was a sophomore, not a rookie), but there is something to be said for that element of surprise that often helps new starting signal-callers excel. What if the rest of the league needs time to figure Mahomes out? If he makes his debut in December, opponents might not have that luxury. It could be a sneaky way to ride that wave, possibly even increasing the team’s chances if/when it faces New England and/or Pittsburgh in January.

The question the Chiefs really have to ask themselves is: What have we got to lose? To their credit, the Bills admitted they didn’t feel they were good enough to contend with Taylor at the helm. They rolled the dice and got snake eyes. If the Chiefs begin to feel as though they aren’t good enough to make a run with Smith, rolling the dice with Mahomes really couldn’t hurt.