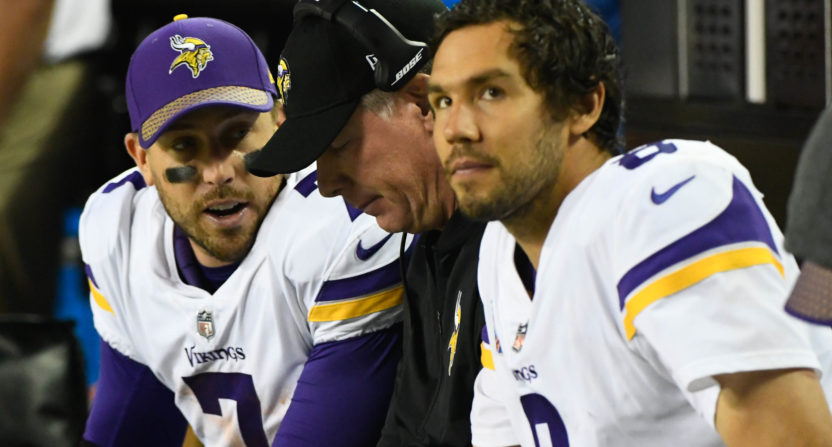 The Minnesota Vikings have three quarterbacks on their roster who are widely considered to be good enough to start in 2018. The problem is that all three of those quarterbacks — 2017 revelation Case Keenum, 2016 star Sam Bradford and 2015 breakout youngster Teddy Bridgewater — are scheduled to become free agents in three weeks’ time.

Conventional wisdom says the Vikings will pick one of the three and the other two will escape on the open market, simply because it doesn’t seem realistic to pay big bucks to two players at one position.

But didn’t the 2017 Philadelphia Eagles prove that it’s actually very smart to do exactly that? Philadelphia beat Minnesota in the NFC championship game and went on to win Super Bowl LII with well-paid backup quarterback Nick Foles, whom team owner Jeffrey Lurie referred to as their “other starting quarterback.”

Minnesota knows that Keenum is the hottest, Bradford is the most accomplished and Bridgewater has the highest ceiling. But with so much unknown, the front office might be better off hedging by paying up to keep two of the three.

It’ll be costly, but other teams presumably have the same concerns about all three quarterbacks. Besides, they’re all drooling over Kirk Cousins right now and it’s still possible Drew Brees hits the market. AJ McCarron could even be seen as an acceptable alternative by many.

In other words, this isn’t a great year to be a free-agent quarterback.

The Vikings are projected to have over $53 million in salary cap space. They can afford to give Keenum or Bradford $20-plus million per season or a $21 million franchise tag (probably the better option if they’re keeping two potential starters and will want a potential easy out) and also give Bridgewater a short, lucrative prove-it deal. If that means that quarterbacks hog $35 million in cap space in 2018, so be it. You’re set pretty much everywhere else anyway, especially with Dalvin Cook returning from injury.

General manager Rick Spielman wasn’t likely to do a lot of wheeling and dealing in free agency. Better off spending money to lock things down and cover your ass as best you can at the quarterback position. They can keep two of those three signal-callers and still afford to bring back Jerick McKinnon, Tom Johnson and Joe Berger.