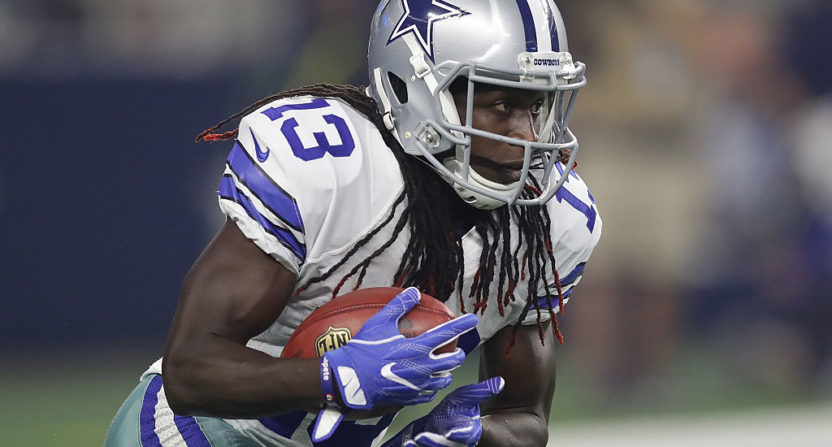 Nothing should ever come between man and man’s best friend. Unfortunately, it seems some jerk is doing everything possible to mess with the emotions of Dallas Cowboys wide receiver Lucky Whitehead and his love for his dog, Blitz.

Whitehead announced on his Instagram account that somebody has taken Blitz from him after a break-in occurred at a friend’s house. Blitz was being watched at the friend’s house at the time of the dognapping, and now that dog thief is demanding Whitehead pay $10,000 to have the dog returned to him.

I've taken some time to collect my thoughts on this subject matter, and it's very heartbreaking to say that Blitz has been stolen from my home last Sunday. While out of town, Blitz was being taken care of by a close friend at my house and someone broke in and took him. Whomever stole Blitz has contacted my phone numerous times, demanding ransom money. I strongly advise you to stop and return my boy safely before it gets any worse! If you know of any details regarding Blitz's whereabouts or who may be involved in this, please contact me immediately. ? #repost

Whitehead shared more of this story in an interview with the NBC affiliate in the Dallas-Fort Worth area. Whitehead says he received a call from what may have been a burner phone to demand the money. Whitehead said he would agree to pay the money, just so long as he knew his dog was OK. Told he would receive another call, Whitehead says he has not heard back from the malicious dognapper.

In the interview, Whitehead seems to feel pretty strongly about the idea this was carefully planned by whoever the guilty party or parties may be.

This is sick. Whoever stole this man’s dog is a sad, disturbed individual. Here’s hoping this story has a happy ending that results in Whitehead and Blitz being reunited and whoever is responsible gets sent to jail for whatever time the courts demand.

Update: The dog has been found, and is with Fort Worth rapper Boogati Kasino. Kasino says in the profane video below that he didn’t steal the dog, but bought it for $20,000, and wants his $20,000 back before he returns it.

I didn't steal the men dog I bought the dog in I found out it's his dog so I'm just asking for my money back that I paid for the dog pic.twitter.com/F43i4JuVQw

???? WTF!!!!! Ft Worth rapper @Boogottikasino wants Cowboys player @ninjafast22 to pay him $20,000 in order to get his pitbull back pic.twitter.com/1QLVAZ5jcZ