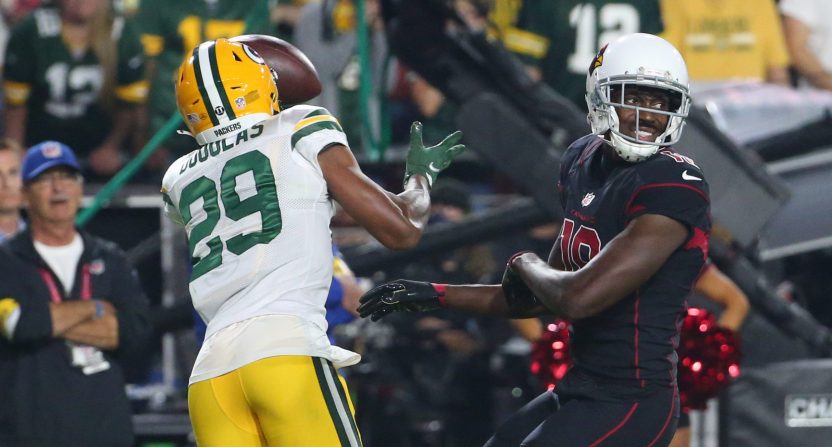 The Green Bay Packers beat the Arizona Cardinals 24-21 on Thursday Night Football in Glendale, AZ. Here are our main takeaways from the Packers’ victory:

So much happened in the final minutes, but we’ll just get to the nitty-gritty of it.

The Cardinals stop the Packers on 4th-and-goal inside the 1! pic.twitter.com/CScSMKv2c8

Arizona was taking advantage of the opportunity and was even in position to get a go-ahead touchdown in the final seconds. However, on 2nd-and-goal from inside the five-yard line, Kyler Murray was intercepted by Rasul Douglas with 12 seconds left to give the Packers the victory. Veteran wide receiver A.J. Green didn’t turn around for the ball and was clearly not on the same page as Murray, leading to the Green Bay interception. Murray was also down for several seconds in pain before limping off the field.

Kyler Murray picked off at the goal-line on a pass that AJ Green was clearly not expecting, to give the Packers a win over the Cardinals.

And Murray was injured on the play to make things even worse for Arizona. pic.twitter.com/JEGVGNW9FB

Hey, the Cardinals lost a game- and it’s a big one

Arizona entered this game as the NFL’s only remaining unbeaten team at 7-0. And now, they’re 7-1, the same record as one other team- the Packers! The Cardinals had a chance to get a win that would be huge for several reasons, and especially for their chances to secure the No. 1 seed and a bye in the NFC. Well, now they’ve lost the head-to-head tiebreaker to the Packers, while currently having the same record.

Miscommunication on a goal-line pass could end up having huge ramifications for the Cardinals this season.

No Davante Adams, no problem

The Packers were without Adams and Allen Lazard due to COVID-19 protocols, and Rodgers still found a way to get it done.

Rodgers completed 22-of-37 passes for 184 yards, two touchdowns, no interceptions, and a 90.4 passer rating. Those numbers aren’t at all exciting, but Rodgers did a great job taking what the Cardinals gave him and moving the chains, making quick and efficient passes. He connected with veteran wide receiver Randall Cobb — who the Packers brought back in a trade with the Houston Texans in July — for two touchdowns.

Aaron Rodgers and the Packers go up 17-7 on the unbeaten Arizona Cardinals. 🏈 pic.twitter.com/SZ6KDEXNqo

Now, this of course isn’t suggesting that Adams isn’t ridiculously valuable; he’s arguably the best receiver on the planet. It’s just another example of Rodgers showing that he can adapt and find a way to win games no matter what players are around him. That’s a special trait and why this league is so much about great quarterback play.

Rodgers got some help from the running game, with Green Bay — led by AJ Dillon (78 yards) and Aaron Jones (59 yards, one touchdown) — rushing for 151 yards over 34 carries.

Key injuries to both teams

Arizona star receiver DeAndre Hopkins is dealing with a hamstring injury — that he appeared to aggravate — that limited his play in this game, in which he caught both of his targets for 66 total yards. Having 10 days to heal (the Cardinals play the San Francisco 49ers on Nov. 7) certainly helps things, but Hopkins is likely questionable for that one.

And as we alluded to earlier, Murray appeared to be dealing with a lower leg injury in the final seconds, so that’s obviously a situation worth monitoring.

#KylerMurray left ankle injury on the gift "1st down" affects outcome. See how with the eversion sprain, he doesn't step into the throw that was picked. (Receiver didn't help him either). pic.twitter.com/4v7nynkxBW

For the Packers, tight end Robert Tonyan left with a knee injury that didn’t look good after finishing off a 32-yard reception.

Robert Tonyan with a 32-yard reception, but suffers an injury. He's able to walk it off, at least. pic.twitter.com/JGYXw1JoBZ

The Packers are red-hot

Green Bay has gone from an embarrassing Week 1 loss vs the New Orleans Saints to winning seven straight games and being tied for the best record in the NFL — and again, having the current NFC No. 1 seed — in Week 8. That’s quite a turnaround. They follow up this impressive victory with a road game against Patrick Mahomes and the (surprisingly) struggling Kansas City Chiefs in Week 9.