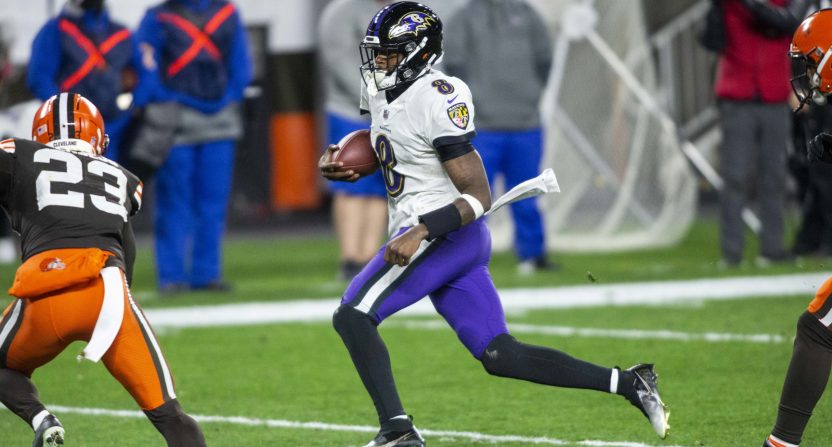 The Baltimore Ravens took down the Cleveland Browns 47-42 in a Monday Night Football classic. Here are our main takeaways from the game:

Just, wow, what a game

This is probably the Game of the Year through 14 weeks of the NFL season. It featured a bit of everything… including an amazing bad beat. 89 points, 35 points in the fourth quarter, 878 yards (and 108 more yards by the losing team), constant back-and-forth action in a full-on shootout, and a crazy performance/situation from Lamar Jackson.

And it had a particularly incredible finish…

After the Browns tied the game 42-42 with 1:04 remaining, the Ravens got to the Cleveland 37-yard line. And Tucker nailed a 55-yarder for the win (technically there were still two seconds left, which led to the bad beat mayhem).

Anybody watching the game just assumed he would make this kick (and even if the kick was a 60-yarder), because that’s what he does. He’s truly an *incredible* kicker.

The reigning NFL MVP left the game in the fourth quarter with cramps, which led him to missing a full series and part of another drive. But Jackson’s replacement, Trace McSorley, suffered a knee injury with the Ravens trailing 35-34.

Trace McSorley now hurt… and Lamar Jackson appears to (maybe) be coming back in on 4th down with 2 minutes remaining. #MNF pic.twitter.com/TGYzF5tWpf

That led to Jackson returning to the game on 4th-and-5 with two minutes remaining. And he threw a go-ahead 44-yard touchdown pass to Marquise Brown.

Here was the “Lamar Jackson returns from the locker room to play hero” cam. pic.twitter.com/MXs0oG27XC

Jackson also led the Ravens down the field to set up Tucker’s game-winning field goal.

It was an amazing sequence of events, and a 2019-esque overall performance from Jackson (in what has been an up-and-down 2020 season for him). While he turned it on in the passing game late, he was extremely effective on the ground all game. He finished with nine carries for 124 yards (13.8 AVG) and two touchdowns.

The Ravens tied it up 7-7 after a Lamar Jackson TD run. #MNF pic.twitter.com/OAso2GBxdQ

Lamar Jackson with his second rushing TD of the night to give the Ravens a touchdown lead. #MNF pic.twitter.com/o0kvVZZ6kt

This Lamar Jackson run is ridiculous.

Browns had no answer for Ravens’ rushing attack

It wasn’t just Jackson getting it done in the run game for the Ravens. Gus Edwards made the most of his seven carries, running for 49 yards (7.0 AVG) and two touchdowns.

Rookie running back J.K. Dobbins chipped in 53 yards on 13 carries with a touchdown.

Overall, the Ravens had 32 carries for 231 yards (7.2 AVG) and five touchdowns. The Browns may not be tested much in this department against the New York Giants (without Saquon Barkley) and Jets over the next two weeks, but they will need to do a much better job of stopping the run in order to win in January (if they can get there; more on that to come later).

Baker Mayfield was fine, but had a killer interception

Mayfield made some big-time throws and had a nifty go-ahead rushing touchdown with under seven minutes remaining, but he had a really bad interception that was returned to the one-yard line, leading to an easy Ravens touchdown.

Baker Mayfield with a big yikes interception. The Ravens would then get a JK Dobbins touchdown (and then they too missed an XP; 34-20 Baltimore). #MNF pic.twitter.com/noEOFIGN19

This Dawg having a drink after the Baker Mayfield killer interception. pic.twitter.com/TfQlc51Gp5

Who knows how things go if that interception doesn’t happen, but it was without question a massive play in a game that came down to a field goal. And these are the kind of plays that Mayfield can’t have — particularly in big games — in order to take the next step.

The Ravens badly needed this one

Baltimore snapped their three-game losing streak last week, but in a win over a bad Dallas Cowboys team. This was a game they needed both to get their mojo back, and with their playoff hopes in serious question due to a loaded AFC race.

With the victory, the Ravens are now 8-5, but that still leaves them out of the seven-team playoff field at the moment; the 8-5 Dolphins are currently the No. 7 seed due to having the better winning percentage in conference games. And even the Las Vegas Raiders — winnable games against the Los Angeles Chargers, Dolphins, and Denver Broncos remaining — are right there in the mix at 7-6.

The good news for the Ravens (along with getting more confidence after this win) is that their remaining schedule is comically weak: vs the Jacksonville Jaguars (1-12), vs the New York Giants (5-8), and at the Cincinnati Bengals (2-10-1, and Joe Burrow is done for the year). And that’s why Five Thirty Eight gives Baltimore an 88% chance to make the playoffs, even while currently being left out. Monday night’s game was *crucial* to Baltimore’s playoff chances, and they took care of business.

The Browns are still in good shape too. Five Thirty Eight gives Cleveland a 87% chance to make the postseason. They’re now 9-4 and the AFC’s No. 5 seed; the Tennessee Titans (No. 4) and Indianapolis Colts (No. 6) have the same record. And like the Ravens, the Browns have multiple cupcakes remaining on the schedule with games against the Jets and Giants, before finishing off against the Pittsburgh Steelers.