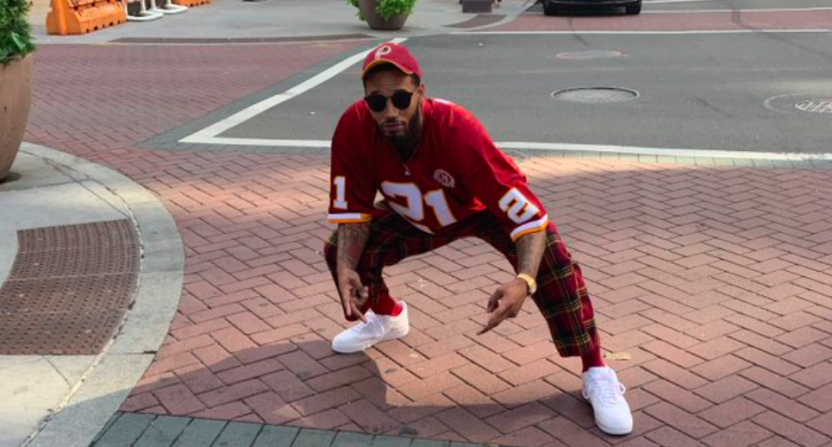 Right off the bat, we just want to say that this time…this one may not be on Philadelphia sports fans.

These days, Mike Scott is an eight-year NBA veteran who is currently playing for the Philadelphia Sixers. He’s become something of a fan favorite, even earning his own ardent following known as the Mike Scott Hive. You might also remember him from the time he crashed a Sixers fan’s wedding.

However, long before he arrived in Philly, Scott grew up in Virginia. And as you might expect of a young sports fan living there, he became a fan of the Washington NFL franchise. You may also be aware that Washington is a hated rival of the Philadelphia Eagles, the NFL franchise in the city where Scott is currently employed. So it’s complicated.

Sunday, when Philly and Washington were set to kick off their NFL seasons at Lincoln Financial Field, Scott decided to head over beforehand and do some tailgating. The thing is, he went over clad head-to-toe in burgandy and gold Washington gear. We know this because he tweeted about it.

In a lot of major American cities, you might expect to be able to get away with this kind of thing. And to be fair, you should be able to root for whoever you want anywhere you want. But, this is Philadelphia. And whatever you think about Philly sports fans, there are things you just don’t do without expecting some kind of reaction.

And when Scott showed up at the tailgate, he got a reaction.

According to Deadspin, a Snapchat account tweeted and then quickly deleted a video of a fight that appears to show Scott fighting with at least two people. A man in green can be seen falling to the ground and Scott (presumably) can be seen with his hands raised, backing up as multiple people in green and black come towards him.

You can view the video below:

Later on, Scott did tweet a photo of himself at the game and looking unscathed, so apparently he came away from the incident fine.

According to Deadspin, local police do not have any reports filed about the incident, so, at least for the moment, it looks like it’s going to go down like your usual pre-game fight at the Eagles tailgate. Meanwhile, the Sixers have released a statement saying they “are aware of the situation and are in the process of gathering more information.”