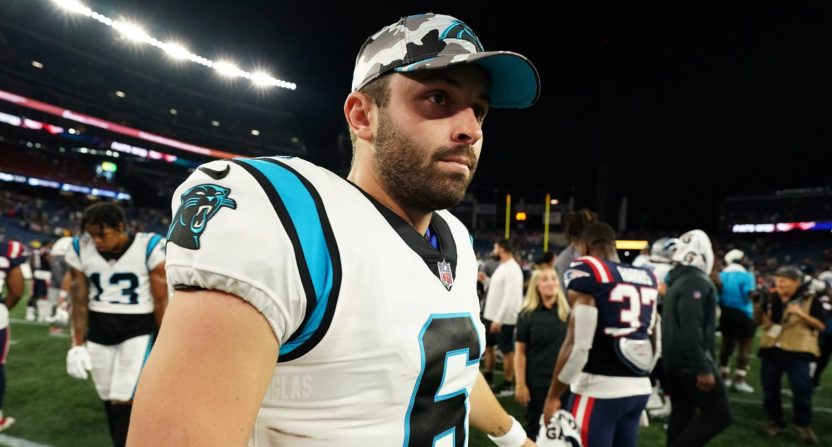 Baker Mayfield was officially named the starting quarterback of the Carolina Panthers over Sam Darnold this week, and Fox Sports host Skip Bayless expects the decision to have a historic payoff.

While Mayfield’s massive regression last season caused him to fall out of favor with many NFL fans and analysts, Bayless might be the biggest supporter the quarterback has and he fully expects the Panthers to benefit from their offseason acquisition.

“What’s about to happen is what I’ve been telling you the whole offseason,” Bayless said to his Undisputed co-host Shannon Sharpe. “He’s about to become the steal of the century. The biggest bargain ever.”

“I did not think that the Carolina Panthers would see the light on Baker this quickly and to their credit, they did,” Bayless continued. “Matt Rhule just saved his season and saved his job because Baker Mayfield is going to turn that team into what I’ve been telling you all along, into a Wild Card Playoff team.”

The steal of the century, the biggest bargain ever, the leader of a playoff team. Those are some lofty expectations for a quarterback that was essentially dumped by the Cleveland Browns just one year after he led them to their first playoff appearance in nearly two decades. Mayfield regressed significantly last season, which is why Cleveland traded their former franchise quarterback, and it’s why there weren’t many suitors for his talents beyond Carolina.

What’s most interesting about Skip’s oozing confidence over Mayfield’s marriage to Carolina, is that the Fox Sports host previously pleaded with the Panthers not to trade for his favorite quarterback.

“I have one request of the Carolina Panthers,” Bayless said in June. “Please! Please! Do not trade for my man Baker Mayfield. I don’t want to see him sent to purgatory because he’d basically go from clown show to clown show. That’s what he’d do. The Browns clown show to the Panthers clown show.”

Just over two months later, Bayless seems to have a lot more confidence in the Panthers’ clown show.