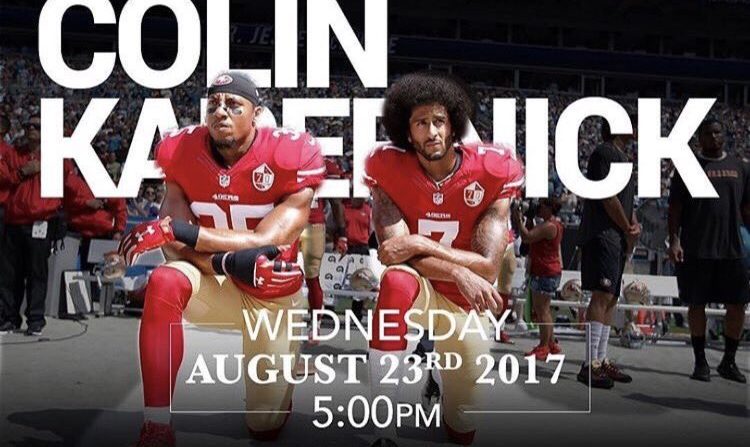 The Colin Kaepernick free agency saga has likely caused officials at NFL HQ many headaches this offseason. With the NFL regular season set to begin in just under a month, the headaches could get worse.

I Did Not Organize And Set Up This Protest. However I Still Support My Brother And His Stance On The Injustices In The USA

That’s right, Spike Lee is taking part in a Colin Kaepernick rally at NFL HQ on Wednesday, August 23rd, two weeks and a day before the NFL regular season kicks off.

One note though about the pic in Lee’s tweet, “Kaepernick” is spelled wrong. You can barely tell but it appears they are missing the first ‘e’.

I hope you didn't spell his name wrong either, SPIKE

Pretty sure I’m not alone when I say this, but if you’re going to organize a rally for an NFL player at NFL HQ, maybe spell their name right in the announcement you tweet out?

In all seriousness, the Justice League NYC and Empower Movement are two notable groups involved. The Justice League specifically is a big name because they are the group who made the famous “I Can’t Breathe” shirts after Eric Garner was killed.

Not to take away from the seriousness of this rally about supporting someone protesting police brutality, but with this rally set to take place two weeks from Wednesday, one has to wonder if this will even help or hurt Kaepernick’s chances at a contract. In my honest opinion, I think it’s neither, but if I had to choose one I think it could hurt him.

Put it this way, the NFL would probably prefer for this whole saga to be over and for Kaepernick to either be signed or retire. In doing so, one would have to think the NFL may have pushed teams to sign the controversial QB. This makes me question why Lee and company would hold the rally at NFL HQ.

It’s not like the NFL can sign Kaepernick to play for a team. Instead, maybe this rally should’ve occurred at NFL stadiums and front offices where teams who need quarterbacks or were rumored to sign Kaepernick play. That might be more effective because those teams can actually sign and play Kaepernick, the league meanwhile cannot.

That’s how the rally doesn’t help or hurt Kaepernick. In terms of how it helps Kaepernick? I don’t think it will at all really. Back in May another group held a rally at NFL HQ to support a team signing Kaepernick and their rally wasn’t only in NYC either.

“The group 100 Suits for 100 Men, which works with parolees who are trying to re-enter the workforce, is planning a show of solidarity at the NFL’s Manhattan headquarters… At least 15 rallies in all are planned around the country, including in Brooklyn, Harlem, Chicago, Miami and Washington, D.C.”

Once again this occurred back in May, and didn’t seem to help Kaepernick land a contract at all, nor hurt his chances at finding a team. Everything kind of remained the same.

As for how it hurts, well that’s a bit easier to understand. There is a ton of anti-Kaepernick sentiment floating around right now. Just look at the responses to Lee’s tweet:

Someone explain to me why Collin Kaepernick deserves to be on an NFL roster.

Hope everyone thanks the police who will be protecting you to have a rally for Kaepernick.

Stop feeling bad for the Dude! He had a deal and turned it down!!! This is what most people won't show you!!! https://t.co/S1i6i4ZdBc

"United We Stand" But isn't he kneeling in the picture?

In a way, this rally could just cause issues for those rallying for Kaepernick. For one, I wouldn’t be surprised if people who are against the rally go to NFL HQ and cause even more trouble or attempt to discredit those rallying for Kaepernick. Second, I know they need time to get out the word and plan this, but a rally two weeks before the season opener may be a little late if their purpose is to support Kaepernick and for him to be signed to a team. But for those who feel there is a problem with police brutality toward black people and other minorities as well as those who feel that someone is being “blackballed” for kneeling in order to raise an important issue while players who go get busted for domestic violence or sexual assault or dogfighting can not only play but be prominent stars, it’s still worth it.

At the end of the day, who knows if this will really help or hurt Kaepernick’s chances at a job in the NFL. The QB is probably good enough to get one, it’s just a question of if a team wants the baggage associated with him. That’s an entirely different question and one that seems ridiculous in a league where a player can be drafted after video evidence emerges of him punching a woman.