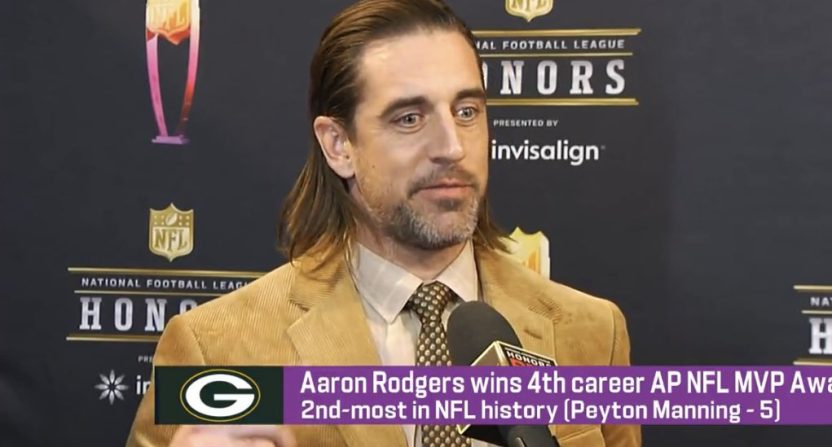 Rodgers also said that he hasn’t yet made a decision on his NFL future, but said he’ll decide “in the near future” and is “not going to keep a lot of people waiting.”

#Packers Aaron Rodgers said he has not made any decisions on his future. "I'll make a decision in due time, not in a ton of time," he said. "I'm sure that decision is coming in the near future. I'm not going to keep a lot of people waiting."

So we got that stuff out of the way. Let’s move on to how he looked at the awards show, because people certainly had thoughts.

Rodgers had the long hair slicked back to go with a tan corduroy suit.

Here’s some reaction to Rodgers’ appearance at the awards show:

he looks like he’s at an auction to buy a triceratops tooth pic.twitter.com/3FucGlIV3S

this is the look of a real estate agent gone bad

"Everyone knows that vaccines are safe and effective. What my research presupposes is…maybe they're not?" pic.twitter.com/HZwEv9Utip

Rodgers looks like the sales manager at Big Roy’s Cadillac in Reno, NV in 1979. pic.twitter.com/0hwhnLiDge

Amazing how Aaron Rodgers now looks like a drunk car salesman from 1978 pic.twitter.com/nCUqMtutOC

Aaron Rodgers looks like after decades of following around the Grateful Dead, he’s decided to clean up his act and attend a job fair. pic.twitter.com/pBA0wFsmEg

that Rodgers hair is some nasty stuff man lol https://t.co/WXsjIlbrYU

Don’t forget to check the CarFax first, kids. That Buick has seen better days, no matter what this man says. pic.twitter.com/tlnrepneCN

Rodgers looks like he belongs in red dead redemption

Aaron Rodgers looks like he makes a living off betting on horse races and smoking cigarettes.

Aaron Rodgers looks like the Butler from from Scary Movie 2 and a Walmart Jared Leto.