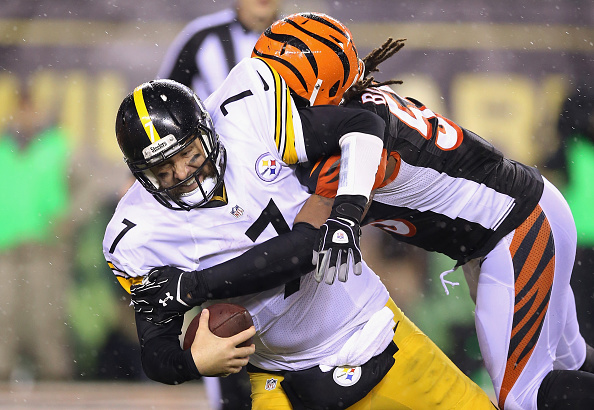 The Cincinnati Bengals had a complete meltdown against division rival Pittsburgh Saturday night when things went completely off the rails in Cincinnati and the tension boiled over from just about every conceivable angle possible. Now, a day later, the fines from the NFL offices are starting to come out.

Bengals linebacker Vontaze Burfict is facing a suspension and Steelers assistant coach Joey Porter will reportedly be fined for his involvement in a verbal exchange with Bengals players. Injuries could also take a toll on the Steelers going into their game with the Denver Broncos next weekend.

Steelers assistant coach Joey Porter will be fined for coming on to field Saturday night and engaging Bengals players, per a source.

Porter came off the sideline to exchange not-so-pleasantries with Bengals players during the fourth quarter after Burfict knocked Steelers wide receiver Antonio Brown with a hit across the middle of the field. Coaches are not allowed on the football field at any time, with the exception of a head coach walking out to check on an injured player. As trainers checked on Brown on the field, officials were busy trying to keep Bengals and Steelers players separated.

Burfict, who was penalized for the hit on a defenseless receiver, now faces a possible suspension for the hit. Burfict commented on Porter after the game. Adam Jones also drew a penalty during the dustup on the field when his arguing with an official crossed the line by making contact with a ref. That penalty could be cause for another fine when all is said and done.

“I was just telling the coaches out there [what happened]. That’s why Adam pushed him,” Burfict said (per The Washington Post). “[Porter] shouldn’t be on the field cussing us out. . . . It was Joey Porter. The ref heard it all but the ref threw the flag on Adam. That was about it.”

Per Schefter’s Facebook update, Burfict was already been fined $69,454 just last month by the NFL for a series of plays against the Steelers. Because of that, Burfict loses ground to stand on in any case, especially with the Steelers involved in the situation. This suspension would of course be held over to the start of the 2016 NFL season, although it remains to be seen how much time Burfict may be forced to sit out.

Bengals LB Vontaze Burfict is facing suspension for his hit on Antonio Brown during Saturday night's wild-card game, per source.

As for the injuries, they could prove devastating for Pittsburgh. Steelers quarterback Ben Roethlisberger left the game with a right shoulder injury as a result of a third-quarter sack by – you guessed it – Burfict. Big Ben did make a return to lead the Steelers to victory, but his effectiveness in the next round should be a serious concern for the Steelers. Roethlisberger was a far cry from his usual self, and wasn’t throwing darts to his receivers after the big hit from Burfict.

The Steelers could also be without Brown, who now enters the NFL’s mandated concussion protocol. The loss of Brown could be huge for Pittsburgh, as he had 136 catches for 1,834 yards and 10 touchdowns this season and had seven catches for 119 yards on Saturday evening.

With a quarterback who may not be able to throw with much velocity and the potential loss of a top wide receiver, Pittsburgh’s offense could be cooked before making the flight to Denver next weekend.