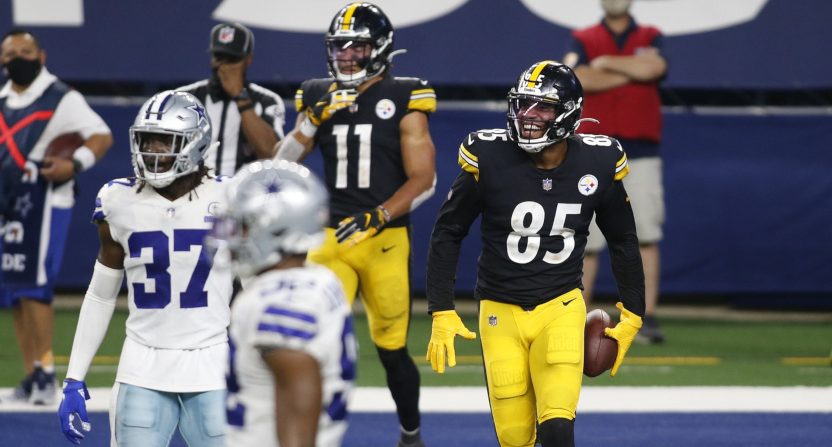 The Pittsburgh Steelers and Dallas Cowboys entered Sunday’s game in very different circumstances, with Pittsburgh at 7-0 and Dallas 2-6. Plus, the Cowboys were down to third-string quarterback Garrett Gilbert (who only joined the team last month; they signed him off the Cleveland Browns’ practice squad on Oct. 12) thanks to Dak Prescott’s likely season-ending injury and Andy Dalton testing positive for COVID-19. But Dallas led this one for much of the game, putting up the first 13 points and then taking a 19-9 lead in the third quarter. However, the Steelers responded with 15 unopposed points in the final quarter to pull off a 24-15 road win.

This game got off to a slow start, with three punts (two from Pittsburgh, one from Dallas), a Cowboys’ field goal from Greg Zuerlein (who was four for four on field goal attempts on the day), and a Steelers’ turnover on downs in the first five possessions. However, that turnover on downs (which came when the Steelers went for it on 4th and 1 on the Dallas 35 and running back Benny Snell Jr. was stopped for no gain) got the Cowboys going, with Gilbert then conducting an eight-play, 65-yard touchdown drive that he capped with a 20-yard pass to CeeDee Lamb:

Dallas then forced a punt, and they came up with an incredible return, with Cedric Wilson lateralling to C.J. Goodwin, who took it 83 yards (it netted 73 after a penalty):

That led to a Zuerlein field goal, which put the Cowboys up 13-0 with just under four minutes left in the first half. However, the Steelers then responded; Ben Roethlisberger took them 75 yards for a touchdown in 2:36, and Lamb fumbled on the next Dallas drive. That meant Pittsburgh ball at the Cowboys’ 39, and while they weren’t able to advance too far (a Mason Rudolph pass to Juju Smith-Schuster was called back for an illegal formation), kicker Chris Boswell did eventually hit a 59-yard field goal (he missed an extra point on the touchdown, then missed a field goal attempt from 54, but that was nullified thanks to a penalty and a quick whistle) to make it 13-9 heading into the half. However, the Cowboys would expand their lead with two field goals in the third quarter.

The Steelers came roaring back after that, though. Just over two minutes later, Roethlisberger hit Smith-Schuster for a 31-yard touchdown:

BY ANY MEANS NECESSARY!!!! pic.twitter.com/BhoTr3alLr

And Dallas was only able to kill three minutes of clock before punting on their next drive. That gave Pittsburgh the ball back with 4:11 left, and Roethlisberger needed just under half of that for a six-play, 64-yard drive, finished off with an eight-yard touchdown pass to Eric Ebron (seen at top celebrating):

The @Steelers take the lead with 2:14 remaining! #HereWeGo

The two-point conversion attempt failed, though, and that gave Dallas a chance. However, the end of this didn’t work great for either team. The Cowboys gained one first down, but then Gilbert took a 17-yard sack on fourth-and-eight, creating a turnover on downs. The Steelers then turned it over on downs themselves, though; they gained nine yards on three runs, but then opted to go for it on fourth and one, and Randy Gregory stopped James Conner for a loss of four. That gave Dallas one more chance, and they put together a pretty good drive, including a great sideline catch by Lamb:

Gilbert then found Michael Gallup for 20 yards, giving the Cowboys a first down at the Pittsburgh 29. However, there were only eight seconds left after a spike to stop the clock. Gilbert did hit Wilson for six to get down to the 23, and then threw it to the end zone for Lamb on the final play, but that fell incomplete.

This was far from a perfect game for the Steelers, especially against a Cowboys’ team that had struggled so much previously. They gave up 243 passing yards and a touchdown (albeit with an interception) to the unheralded Gilbert (who had 21 completions on 38 attempts, 55.2 percent), and they would have lost this one if that final pass had connected. Their offense also had plenty of issues; Roethlisberger’s final stat line of 29 completions on 42 attempts (69.0 percent) for 306 yards and three touchdowns was nice, but there were a lot of times where this offense was just cold. And the special teams had their own issues, from Boswell’s missed extra point to the huge punt return they gave up. But in the end, Pittsburgh did enough to win, and enough to remain the NFL’s only undefeated team.