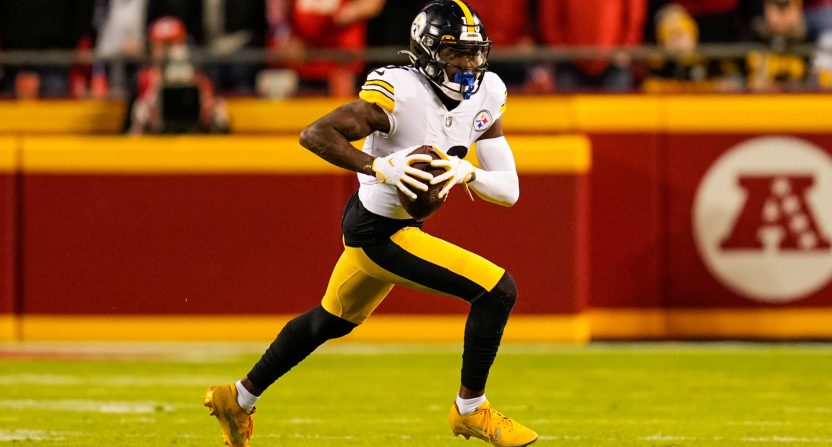 The Pittsburgh Steelers will look extremely different this season after the retirement of long-time quarterback Ben Roethlisberger, but they made a move on Thursday that ensures one of their stars will remain in gold and black for the foreseeable future.

Reports have emerged that the Steelers have agreed to terms on a contract extension with Pro Bowl receiver Diontae Johnson on a two-year deal worth up to $39.5 million including $27 million that will be guaranteed to him.

Steelers new two-year extension for WR Diontae Johnson is worth up to $39.5 million and includes $27 million guaranteed, per source. pic.twitter.com/wSjrKZDNJD

He previously had one year left on his contract with the Steelers, but this move will keep him in Pittsburgh through the 2024-25 NFL season.

Johnson took his game to a new level last season, making his first Pro Bowl appearance after racking in 107 catches for 1,161 yards and ten total touchdowns in the 2021-22 season.

He was arguably the best player on the Steelers’ offense last season, and many see this as a well-deserved extension for the young wide receiver.

This is a great deal for the #Steelers and short term for Diontae Johnson to have a quick turnaround and be back on the market by the time he’s 29. $18.355/year average and guaranteed $27M. https://t.co/UcNnexe8aw

A very good and fair deal for the Steelers and Diontae Johnson.

$18.35 million per years comes in No. 17 on the WR rankings in AAV. And a short extension that allows Diontae to potentially cash in again. https://t.co/KPoscUphC7

Diontae Johnson becomes the first #Steelers WR since Antonio Brown in 2012 and again in 2017 to receive a contract extension of longer than 1 year. PIT matched a RFA tender for Emmanuel Sanders in 2013 and gave Juju Smith-Schuster a 1-year contract in 2021.

Diontae Johnson getting paid a decent sum now and also getting to retry market in two years while still in his prime is a good thing for him.

On the surface, this seems like a shockingly cheap, team-friendly contract for the Steelers considering how large the rest of the wide receiver market has become this offseason.

This actually could be a blessing in disguise for Johnson, however, as he is set to hit free agency again at only 29 years old, where he will likely still be in the prime of his career.

The Steelers’ quarterback situation is still very rocky at the moment as well, and it could provide Johnson with the potential to leave for greener pastures if the team success doesn’t continue under Mitchell Trubisky or Kenny Pickett in future years.