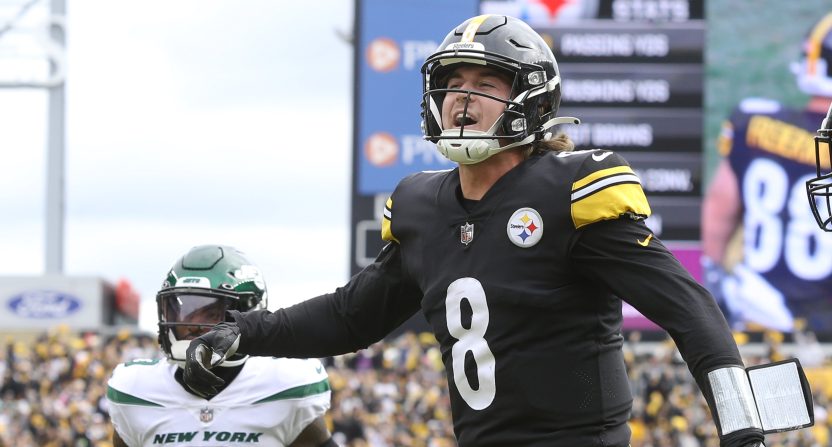 Many Pittsburgh Steelers fans got their wish Sunday.

Rookie quarterback Kenny Pickett replaced starter Mitch Trubisky to start the second half against the New York Jets. After throwing an interception on his first career NFL pass, Pickett scored his first touchdown for the Steelers just a few minutes later.

The team’s first-round pick in the 2022 NFL Draft then led a 12-play, 82-yard drive that he capped with a short touchdown run early in the fourth quarter.

The Steelers’ offense had struggled to a ridiculous degree heading into Week 4, scoring only four offensive touchdowns through the first three games. That’s led to rumors that many players are not happy with offensive coordinator Matt Canada. Many fans have also been vocal about giving Pickett a chance in place of Trubisky.

After going without a TD in the first half against the Jets, coach Mike Tomlin pulled the plug on Trubisky.

Pittsburgh fans and other observers wasted little time debating — and/or celebrating — the change.

I think George Pickens & Kenny Pickett are gonna get along just fine pic.twitter.com/xq9uWOAeP3

Kenny Pickett sets an NFL record in his first game. The rookie threw 3 INTs — two were deflections and one was a Hail Mary.

Pickett finished 10/13 with 3 interceptions. He just set the record for most pass attempts in a game where every single pass he threw was caught! pic.twitter.com/58T7JkxuB9

Pickett’s afternoon did not have a storybook ending, as the Jets rallied to win, 24-20. The rookie QB’s final line — 10-of-13 passing for 120 yards and three interceptions — is misleading. Two of those passes were tipped and could have been caught, and one was a Hail Mary.

Pickett added 15 yards on the ground, including those two scores. According to ESPN, he’s the first quarterback in NFL history to have multiple rushing TDs in his first career game.

I feel like every single Steelers fan would have taken a loss to the Jets if it meant Kenny Pickett would play.

I'm not upset that the #Steelers lost to the #Jets today because I consider this a moral victory. This isn't on Kenny Pickett, it is on the defense at the end of the 4th quarter and the TD call at the end of the game. #SteelersNation #Nfl #NFLtwitter #Herewego #SNUProud #NYJvsPIT

We’ll see how Pickett (seen above during this game) playing goes for the Steelers going forward.