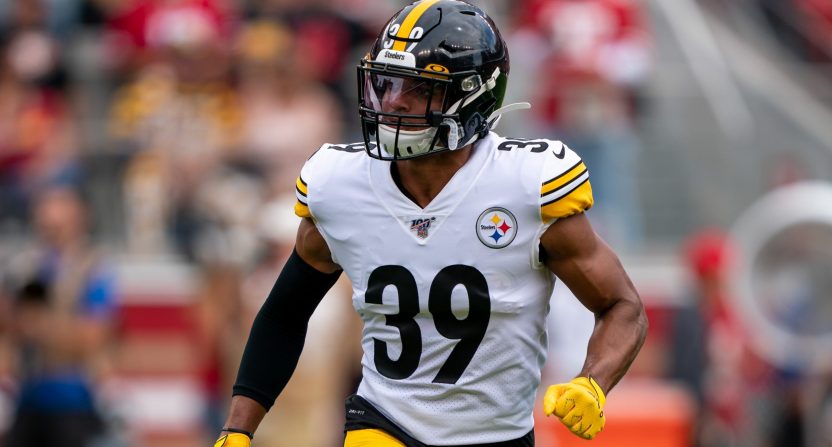 Former Miami Dolphins safety Minkah Fitzpatrick looked like a player beaming with potential when he was drafted out of Alabama with the 11th overall pick in the 2018 NFL Draft. Unfortunately for the Dolphins, they weren’t the team that saw this potential play out.

Shockingly, they decided to trade him to the Pittsburgh Steelers during the 2019 season and he has been excellent ever since.

Since his arrival with the Steelers, he has made the jump to truly becoming one of the best safeties in all of football, making the Pro Bowl in 2019 and 2020 while recording 11 interceptions in three seasons with them. Fitzpatrick has truly changed what the Steelers’ defense looked like with his impact, and Pittsburgh clearly sees him as a piece that they cannot lose moving forward.

On Wednesday, the Steelers came to an agreement with Fitzpatrick on a four-year contract extension that will net the star safety $73.6 million, with $36 million of that being guaranteed to him.

The new highest-paid safety in the NFL, Minkah Fitzpatrick is now locked in for 4 years, more than $73.6M, with more than $36M guaranteed upon signing. Very good news for a rising safety market. https://t.co/T8NSxsp9y7

This deal will make Fitzpatrick the highest-paid safety in NFL history, taking over that spot from Seattle Seahawks safety Jamal Adams.

It is a well-deserved extension for Fitzpatrick and a number of his Steelers teammates echoed those sentiments on social media.

Deserve every bit too 💪🏾 https://t.co/uuza1dKcVJ

Many around the NFL world think that this deal may spark a potential rise in the market for incoming free agents Jessie Bates and Derwin James, who will look for a similar contract next offseason.

This will play a role in the Bengals/ Jessie Bates contract negotiations directly. Minkah Fitzpatrick resets the safety market and now we’ll see where things go with the Bengals and Bates https://t.co/ZPTyHKmbzd

Jessie Bates and Derwin James should be happy with this… https://t.co/zWPSKhcqM3

The Steelers didn't do the Bengals any favors with Jessie Bates on the Minkah Fitzpatrick contract extension. Derwin James should be happy about the deal. https://t.co/d2mKcg1JER

Fitzpatrick will be reunited with former head coach Brian Flores next year in Pittsburgh, which could be a negative for the Steelers considering Fitzpatrick had a “difference of opinion” with him during their time together in Miami.

Regardless, this record-breaking contract should validate that Fitzpatrick will play a big factor for the Steelers for plenty of years to come.