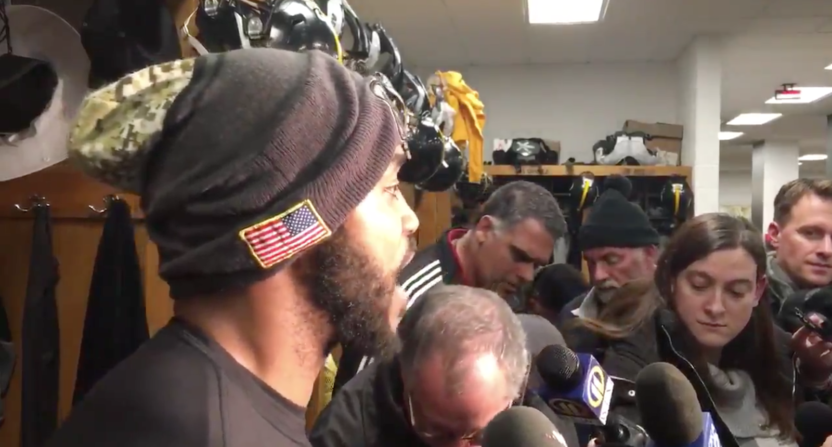 You know things are about to get real when a Steeler sticks up for a Bengal. Pittsburgh safety Mike Mitchell unleashed a scathing rant against NFL officiating and discipline after his teammate JuJu Smith-Schuster and Bengals safety George Illoka received the same suspension of one game as Patriots tight end Rob Gronkowski received for a late hit targeted at the head of a player lying face down on the turf.

“I signed up to play full-speed contact football, and we’re not doing that. I feel like I gotta ask a guy, ‘Hey, are you ready for me to hit you right now?’ before I hit you. And that’s crazy.

“I’m gonna mess around and get hurt trying to protect an offensive player because he’s running an over route. Dammit, your quarterback shouldn’t have thrown that ball messed up. That happened two years ago. I’m not joking at all. Andy Dalton threw a ball to Tyler Eifert two years ago. Tyler Eifert had to dive for it. I was aiming for his gut. But if he don’t dive, he don’t get hit in the head. That’s 50 grand out of my pocket. Because Andy throws a bad ball.”

SteelerNation @George_iloka is a good friend. Weve spent many summers training together. HES NOT A DIRTY PLAYER. He’s a Standup guy just a hard nosed no bs player. In no way was he tryna hurt AB just like I know @TeamJuJu wasn’t trying to hurt #55. Football is violent! #Facts

Mitchell’s statement has flaws. The NFL has an obvious concussion problem, and any solution that helps protect players, even if hypocrisy and inconsistency are byproducts, is better than no solution. Former defensive lineman Osi Umenyiora summed up this sentiment nicely in one tweet earlier.

Are players really this dumb? Hate to say it but cmon. Former players have died and are dying horrible deaths because of head trauma. And you’re complaining because the league is taking steps to at least try and reduce it. “Make it flag football “. Ridiculous

However, even though his off-the-cuff rant may have implied certain things, I don’t believe Mitchell actually wants a system that doesn’t discipline players for making dangerous plays. His issue is with the NFL’s system of discipline rather than the idea of discipline itself.

So gronk elbow drops a guy off the top rope like Dusty Rhodes and gets same suspension as a guy getting a penalty making a football play. Okay cool @NFL @espn @ESPNNFL can’t wait to see what you come up with next.

My real complaint isn’t with the @nfl it’s with my fellow players. How did we agree to this cba? There is no consistency in the way we are disciplined. One week you can commit a foul and be fined the next be suspended. One week a fight is an ejection the next it’s a suspension.

He addressed this toward the end of his rant as well:

“There’s just so much going on in the game right now. We’ve got to do better as players when we sign the next CBA. We’ve got to get better leadership as who’s running the league ’cause obviously everybody — fans, owners, players — are all disappointed in [commissioner] Roger Goodell. We just gotta do better. We can’t have a guy where you just hand out discipline on how you see fit. There needs to be a set guideline of how we do what we do.”

The NFL has clearly had issues oweing to the damage football causes to brains, and until they acknowledge, they’ll struggle to find a successful system of discipline.