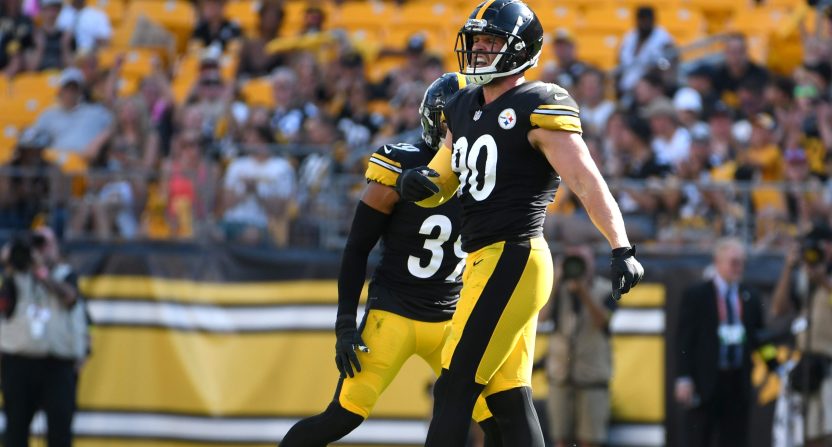 The first Sunday of NFL football for the season is underway and one of the most bizarre games thus far has been an AFC North rivalry showdown between the Cincinnati Bengals and the Pittsburgh Steelers.

While it was a great day for the defense, Steelers’ star linebacker T.J. Watt appears to have suffered a very serious injury on Sunday. A viral video of Watt surfaced in the fourth quarter. It shows him walking off the field in pain, holding his left arm, and appearing to say “I tore my pec.”

Looks like TJ says "I tore my pec" at the end but pic.twitter.com/VIp57YhEmK

Steelers reporter Brooke Pryor confirmed that he has been ruled out of the game with a pectoral injury.

T.J. Watt (pectoral) and Najee Harris (foot) both ruled OUT

Soon after the game, reports came out saying that the Steelers presume Watt did indeed tore his pec.

Steelers believe TJ Watt tore his pec and he is scheduled to undergo scans Monday to confirm diagnosis, per source.

It would be a disastrous injury for the Steelers’ defense to lose Watt, who led the NFL in sacks last season with 23.5. His impact can not be overstated and many around the NFL world are extremely saddened by the injury and what it could mean.

I’m not Jomboy but I’m pretty sure TJ Watt was saying “I tore it” while pointing to his pec? I hope that’s not the case.

Watt was in the midst of another excellent game before the injury, recording an interception, a sack, and three tackles for loss, which makes this injury even more devastating for Steelers fans.

We will surely get more confirmation on the exact injury diagnosis for Watt in the coming days, but on the surface, this is a massive blow to Pittsburgh’s defense in their first game of the season.