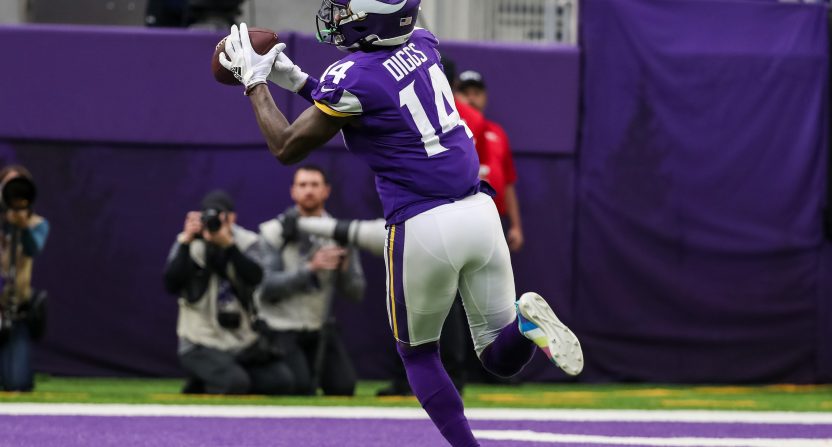 Last week, Stefon Diggs was pretty apparently disinterested in being a Viking. He also contributed to a wacky series of interceptions today when he whiffed on a ball that ended up bouncing off his facemask and resulting in an Eagles interception.

Fair is fair, though, because for the rest of today’s game, Diggs was spectacular. Minnesota looked much more like the contender people have been expecting, as they destroyed the Eagles behind an explosive offensive performance. Kirk Cousins finished the game 22/29 for 333 yards and four touchdowns, including three to Diggs.

The first was a bomb, with Diggs torching his man down the middle and Cousins hitting him in stride.

The second was a similar play, with Diggs easily getting open and Cousins once again finding him with an impressive throw on the move.

You're going to regret that decision. pic.twitter.com/lQ0zfOHOLt

The third and final Diggs catch came after the Eagles had cut the Minnesota lead to 24-20, and it was a hell of a catch at the back of the end zone.

That score essentially iced the game, with the Eagles unable to score the rest of the way en route to a 38-20 victory. Diggs finished with seven catches for 167 yards, a performance that might help put the Diggs narrative to rest, as well as the weird “Adam Thielen called out Kirk Cousins!” storyline that was never really based in reality.