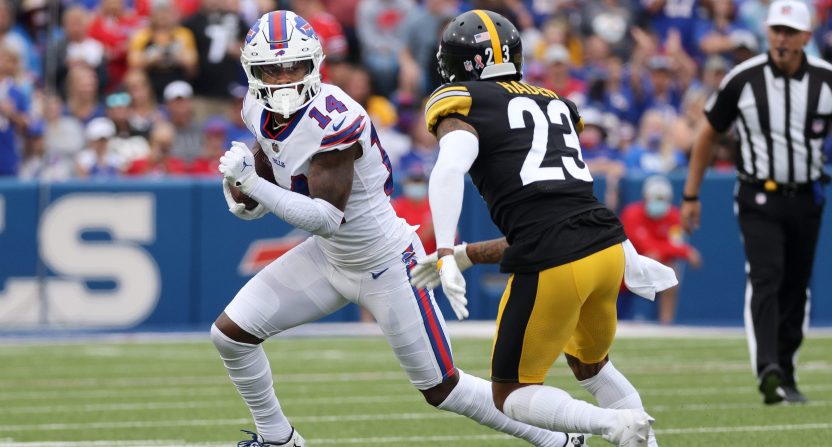 The Buffalo Bills were extremely close to going to the AFC Championship Game last season but ultimately fell short against the Kansas City Chiefs in the Divisional Round of the playoffs.

Buffalo has been excellent over the past few years since quarterback Josh Allen emerged as one of the top quarterbacks in the NFL, but they have struggled to get over the hump when it matters most in the playoffs. They made a number of big moves this offseason that could help them emerge out of the AFC, most notably bringing in eight-time Pro Bowl pass rusher Von Miller on a massive six-year contract worth $120 million.

It certainly looks like they should be in the position to be a contender next year, but Bills receiver Stefon Diggs seems to believe the organization should bring in another veteran cornerback before the start of the 2022 season.

Diggs posted a video on his Instagram story over the weekend of a workout with veteran cornerback Joe Haden, adding a caption with eyeball emojis while tagging the Bills’ Instagram page, likely suggesting that he would like the Bills to bring him in.

The two-time Pro Bowl wide receiver is not the only Bills player that wants the team to bring in Haden. Bills safety Jordan Poyer along with Von Miller have both said that they would like the Bills to bring in Haden

.@JoeBuscaglia asked if Von Miller has been recruiting Joe Haden on the golf course.

Haden has played with the Pittsburgh Steelers for the past five years but is currently a free agent heading into his 13th NFL season.

There are certainly some reasons why this move would make sense for Buffalo. Cornerback Tre’Davious White is coming off a torn ACL last November, and will likely not be healthy for the start of the year. Bringing in a proven commodity like Haden could go a long way in maintaining the team’s performance in the secondary until White returns for the team.

Even if White were to be able to go for the team, bringing in a locker-room presence like Haden is always great for the development of young players, and the team did just draft Florida Gators cornerback Kaiir Elam in the first round of the 2022 NFL Draft.

It will be something worth monitoring in Buffalo, but he already has some players on the team that are on board with him joining the team.