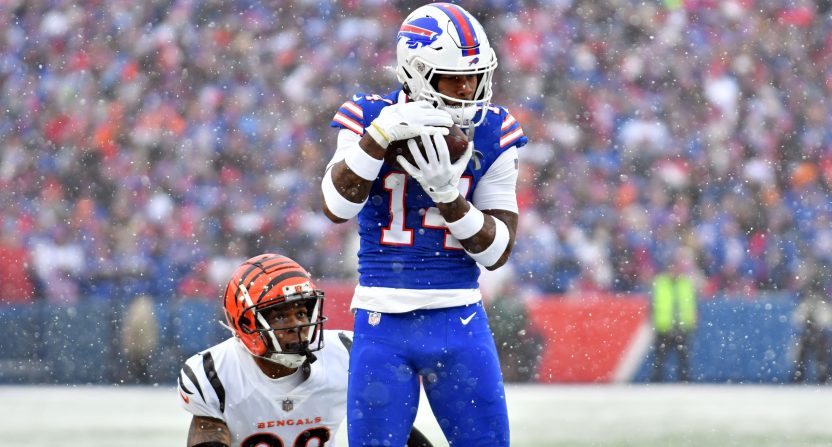 After the Buffalo Bills fell 27-10 at home to the Cincinnati Bengals in the snow Sunday, at least one Bills’ player showed some emotion in an unusual way. With it being the Bengals moving on to the AFC Championship Game rather than the Bills, Buffalo receiver Stefon Diggs was upset. And, according to The Athletic Bills’ reporter Joe Buscaglia, Diggs initially tried to leave the stadium before some of the coaches even reached the locker room:

Bills WR Stefon Diggs darted out of the locker room with all his stuff before some of the Bills coaches were even down to the tunnel area. Practice squad RB Duke Johnson stopped Diggs before he left the stadium and brought him back to the locker room. He left a few minutes later.

This came after video of Diggs yelling at Buffalo quarterback Josh Allen on the sideline took off:

Stefon Diggs exchanging some words with Josh Allen on the sideline pic.twitter.com/J2heSTBMrc

The report on Stefon Diggs storming out of the stadium with all his belongings isn’t surprising. He is a very emotional person and a sore loser. He is very talented, but his actions may come off as selfish, or he is blaming others. In reality, he is just passionate. #NFLPlayoff

It is absolutely weak on Stefon Diggs’ part to leave the locker room before it’s open to the media. He’s a team captain and should uphold his responsibilities in that regard, instead of leaving it up to his teammates.

But Bills’ head coach Sean McDermott was diplomatic in his own comments on Diggs:

Sean McDermott said Stefon Diggs was in the locker room when McDermott addressed the team, “that’s what matters most”#billsmafia

“He’s a competitive guy. That’s what makes him great. What you saw… I wouldn’t want a guy that doesn’t hurt.”

And Allen was conciliatory towards Diggs in answering a question about the sideline exchange:

What was Stefon Diggs saying to Josh Allen on his sideline outburst?

Allen: "He's a fiery competitor. He wants the ball. Whatever it was that we couldn't get him the ball tonight — we're going to have to learn from." #Bills pic.twitter.com/gUPhasyiqz

Diggs (seen at top during this game) had 108 receptions for a team-high 1,429 yards (fifth in the league) and 11 touchdowns this season. In this snowy playoff game against the Bengals, though, he was only targeted 10 times and only wound up with four catches for 35 yards.

We’ll see if there’s any further fallout that comes from Diggs’ actions here. There was some talk about the team possibly trading him this past offseason, but they instead signed him to a four-year, $104-million extension through 2027.