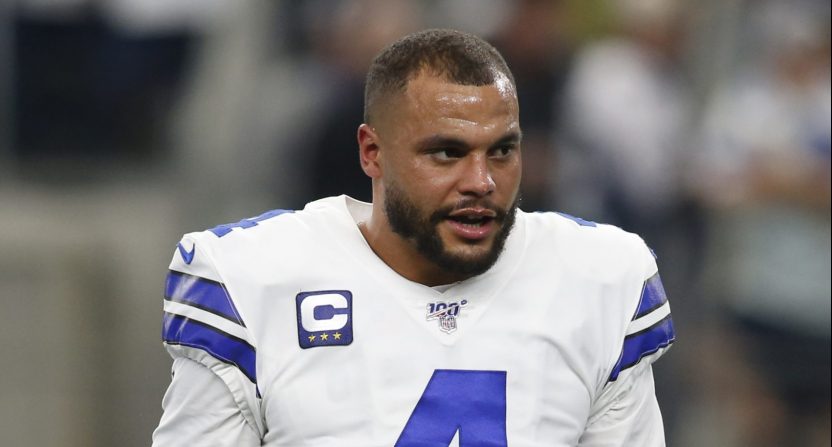 The Dallas Cowboys pulled off a very surprising move on Saturday by signing free-agent quarterback Andy Dalton to a one-year deal, worth $3 million guaranteed, and up to $7 million in incentives. Dalton, 32, spent the last nine seasons as starting quarterback for the Cincinnati Bengals, and was expected to sign with a team that offered him the chance to compete for a starting job in 2020. That won’t happen in Dallas, with the Cowboys already having Dak Prescott at quarterback.

Then again, there have been a lot of questions about Prescott’s future in Dallas. He’s currently scheduled to be part of the 2021 free-agent class (and would be the top free-agent, if so), after the Cowboys placed the franchise tag on him in March. The Cowboys have until July 15 to sign Prescott to a long-term deal, and he reportedly won’t participate in the Cowboys’ virtual offseason program without a new contract.

On Wednesday, Cowboys executive vice president Stephen Jones appeared on 105.3 The Fan, and said that a long-term deal with Prescott will “ultimately get done.”

Jones added that the Dalton signing “has no bearing on Dak.”

#Cowboys EVP Stephen Jones on @1053thefan on Dalton/Dak: “Obviously, it has no bearing on Dak. Dak is the quarterback of our franchise now, and for many years to come. We’ve gotta get his contract—we’ve gotta get over that hurdle. But we’ll do it, it’ll ultimately get done.”

The Cowboys reportedly offered Prescott over $33 million annually in March (he’d make just over $31 million under the franchise tag in 2020), and ESPN’s Chris Mortensen reported that the hold-up in the contract was due to the numbers of years in the offer: Prescott reportedly wanted a four-year deal, while the Cowboys wanted a five-year commitment.

There’s also the concern of how much the pandemic will impact the dollar amounts in upcoming contracts, with the potential for *a lot* of money lost for the NFL if there aren’t games, or if games have to be played in empty stadiums. ESPN’s Adam Schefter reported on Tuesday that the salary cap could be down “$30 million to $80 million in 2021.”

Schefter estimated a loss in revenue of $3.2 billion in 2020 if games are played without fans.

“The various estimates I’ve gotten from executives to owners is that the cap could be down anywhere $30 million to $80 million in 2021,” Schefter said.

So, that’s potentially a big factor for the Cowboys when talking a contract in the neighborhood of $35 million annually.

But it would still be a surprise if Jerry Jones and the Cowboys let Prescott get away. Prescott is still young at 26 years old (27 in July), and has put together a very good 97.0 passer rating over his four seasons in Dallas. In 2019, he averaged career-best 8.0 yards per pass attempt, and led the Dallas offense to an NFL-best 6.5 yards per play. He’s a franchise quarterback, and the Cowboys continue to add weapons for him, like with the first-round selection of wide receiver CeeDee Lamb last week (when they already had wideouts Amari Cooper and Michael Gallup).

It may take time and some drama between the two sides, but expect the Cowboys to indeed get a long-term deal done with Prescott at some point.