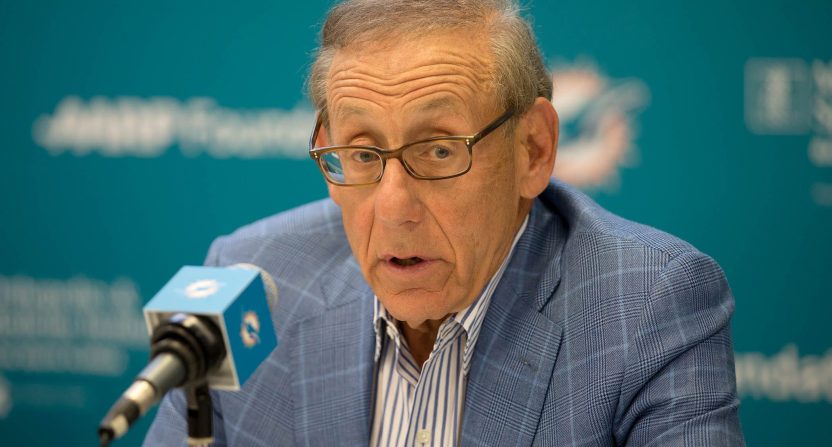 The NFL recently revealed the findings from an independent investigation into team owner Stephen Ross and the Miami Dolphins based on allegations by former head coach Brian Flores. After being found guilty of tampering, the Dolphins forfeited their first-round pick for 2023, their third-round pick for 2024, and Ross is suspended until October 17 along with a $1.5 million fine.

“The independent investigation cleared our organization on any issues related to tanking and all of Brian Flores other allegations. As I have said all along, these allegations were false, malicious and defamatory, and this issue is now put to rest. With regards to tampering, I strongly disagree with the conclusions and the punishment. However, I will accept the outcome because the most important thing is that there be no distractions for our team as we begin an exciting and winning season. I will not allow anything to get in the way of that.”

Ross is free to share his viewpoint of what took place but it doesn’t exactly tell the whole story.

For one thing, the investigation made it rather clear that the team violated tampering rules by having “impermissible communication” with Tom Brady as early as 2019 and with Sean Payton back in January while both were on other teams. Ross has the right to disagree with those conclusions but that is tampering.

In regards to the tanking allegations, while the investigation found that the Dolphins didn’t tank to improve their NFL Draft status and that Ross didn’t instruct or give Flores a financial incentive to intentionally lose games, Ross isn’t exactly an angel in all this either.

It was revealed that Ross made comments about how their 2020 Draft position “should take priority over the team’s win-loss record.” Those comments were enough for Flores to share his concerns to other executives, which they assured Flores that the Dolphins still wanted a “winning culture.” It might not be enough to be found guilty of tanking, but it’s not a great look either.

That view was reflected by many in the NFL media-sphere.

“On a number of occasions during the 2019 season, Mr. Ross expressed his belief that the Dolphins’ position in the upcoming 2020 draft should take priority over the teams win-loss record.” https://t.co/0pifMEl6WT

Feels like a stretch. If you read the Flores lawsuit and the league-ordered independent investigation, it's tough to come to conclusion that it cleared the organization on "all of Brian Flores other allegations," particularly the tampering components. https://t.co/KDcC2vLtVt

Really don't see how you can read the NFL's findings on Ross' comments about the draft and come away believing that Flores' allegations were entirely unsubstantiated, as he claims here.https://t.co/qnjuj8GWhb

There's an impressive level of shamelessness at work here. https://t.co/LFL3IwUQ8R

Interesting tone to take given what the investigation found. https://t.co/QPV8iGepQk