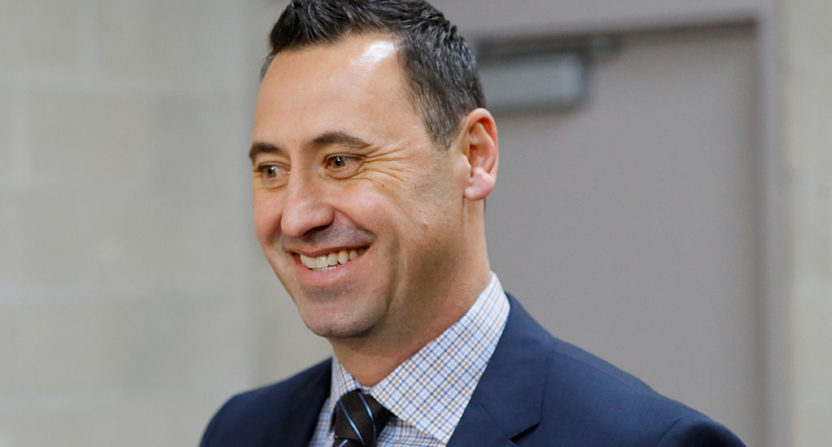 Steve Sarkisian’s return to football has seen an accelerated rebound up the coaching ranks. After being removed as the head coach of USC due to a private battle with alcoholism that turned public in embarrassing fashion, Sarkisian sought help. Among those serving as an inspiration to prove getting back into a positive routine is possible was New York Yankees pitcher CC Sabathia.

Sabathia and Sarkisian did not have a personal connection, but Sarkisian singled out a featured video segment aired on ESPN in 2015 featuring Sabathia’s own struggles and life-altering issues with alcohol as Sarkisian worked to address his own inner-demons. Sabathia took himself off the playing field just before the New York Yankees were preparing for the postseason to work on his own issues with drinking.

Some criticized Sabathia for stepping away at the time he did, but most people with at least half a brain praised Sabathia for having his priorities in the right spot. For Sabathia, it was more important to work on his personal problems that could be more of a long-term problem while he felt he could still control it. That was what Sarkisian needed to do too, even if it was not until after losing his job at USC.

“I was actually at home on a Sunday night and I was watching SportsCenter, and Scott Van Pelt was doing his editorial,” Sarkisian said. “That night was when CC Sabathia had decided to go to treatment before the Major League Baseball playoffs. I thought to myself, ‘Whoa, here’s somebody who is like me, who is in a very high-profile position in sports – ace pitcher of the New York Yankees — and was being relatively commended or almost celebrated for going to do what he did.’

“I knew I needed to [go]. I didn’t know how to go about it. But that thing gave me a feeling of, ‘There’s a like person that is going to do this. I know I need to do it. Now how, what, when.’ So I made the decision to go do it. It’s been the best decision of my life.”

Here is the video segment Sarkisian was referring to…

Sarkisian started his return to football under the wing of Alabama head coach Nick Saban. Saban hired Sarkisian to be an offensive analyst, meaning Sarkisian would help assist with Alabama’s offensive strategies and film work but not handle any coaching responsibilities. This positioned Sarkisian nicely to be promoted to offensive coordinator when the time came, and it did in the midst of Alabama’s postseason this past year. Sarkisian was bumped up to offensive coordinator after Saban and Alabama forced Lane Kiffin out as Kiffin was hired to be the head coach at FAU.

Sarkisian remains in treatment as he takes on his new role with the Falcons, and he says he has received plenty of support along the way as he works to stamp out his drinking problems of the past for good.

“It’s going great,” Sarkisian said of his treatment program. “I don’t really want to get into the specific side of that stuff, but it is going really well. I think, again, the flexibility that Dan, that we’ve worked out, has been one that has fit well with our schedule. It’s a position where I’m comfortable with it. It is something that is daily, and there’s varying degrees of what I do each day. But the reality of it is, it’s gone really well. And I’m in a great place.”