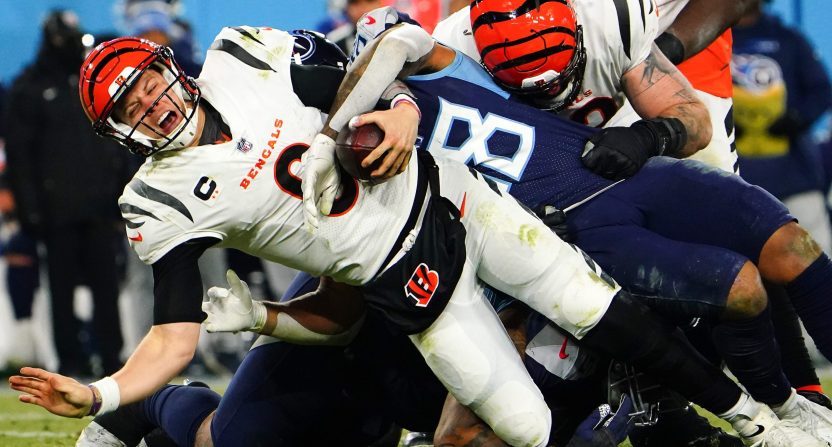 Going into Super Bowl LVI, one of the biggest edges the Los Angeles Rams have on paper is with their defensive front against the offensive line of the Cincinnati Bengals. Cincinnati offensive coordinator Brian Callahan, though, believes in his guys.

Callahan acknowledges that the Bengals’ offensive line has its hands full. Josh Alper of Pro Football Talk quoted Callahan as saying the Los Angeles defensive front “might have the best ones we’ve seen as a collective group.” Still, Callahan has faith that the line will continue to play well enough to win.

“I have a ton of confidence in our guys up front,” Callahan said, per Alper. “They’re battle-tested, they’ve played in tough games, they’ve managed, they’ve made mistakes, they’ve given up sacks, and they just keep coming back and fighting. That’s all you can ask for at this point in the year, for those guys to keep playing as hard as they can for as long as it takes to win.”

The Bengals surrendered only two sacks in their Wild Card Weekend victory over the Las Vegas Raiders, and only one against the Kansas Chiefs in the AFC Championship Game. In the Divisional Round against the Tennessee Titans, however, things were different. Tennessee sacked Joe Burrow nine times in that game.

If the Bengals’ performance in Super Bowl LVI mirrors what they did against the Raiders or Chiefs, there’s a good chance they’ll win. If we see a similar performance to what we saw against Tennessee, Cincinnati’s only hope is that Matthew Stafford will play as poorly in the Super Bowl as Ryan Tannehill did in the Divisional Round. That’s possible, but not likely.

And it’s not as if those struggles came out of nowhere. The Bengals surrendered 55 sacks during the regular season. That was the third-worst total in the NFL, and by far the worst among playoff teams.

Callahan is also correct about the Los Angeles defensive front. Three-time NFL Defensive Player of the Year Aaron Donald is the Rams’ defensive line star, but he’s hardly a one-man wrecking crew. Cincinnati will also have to contend with Leonard Floyd, who recorded 9.5 sacks in 2021 and has 20 sacks over the last two seasons. The Bengals will also have to contain Von Miller, one of the most prolific pass rushers of the last decade who—in Super Bowl 50—sacked Cam Newton 2.5 times en route to winning the game’s MVP.

Normally, sacks aren’t the only way to determine who wins the battle up front, or even the best way to do so. That victory is usually won by the team that pressures the opposing quarterback the most. Pressuring the quarterback can produce sacks but also forces the quarterback to throw the ball away or even into coverage, forcing interceptions.

But in a strange twist, the struggles of the offensive line actually work in Burrow’s favor. He has plenty of experience making tough throws under pressure. Don’t expect him to be overwhelmed.

If Donald and company can not only get to Burrow but bring him down, we’ll see a team celebrate a Super Bowl championship on its home field for the second year in a row. But if the offensive line can buy Burrow enough time to make his passes — even if they are under duress — the Bengals will stay ahead of the sticks offensively. If that happens, Cincinnati will have a good chance to hoist the Lombardi Trophy at game’s end.