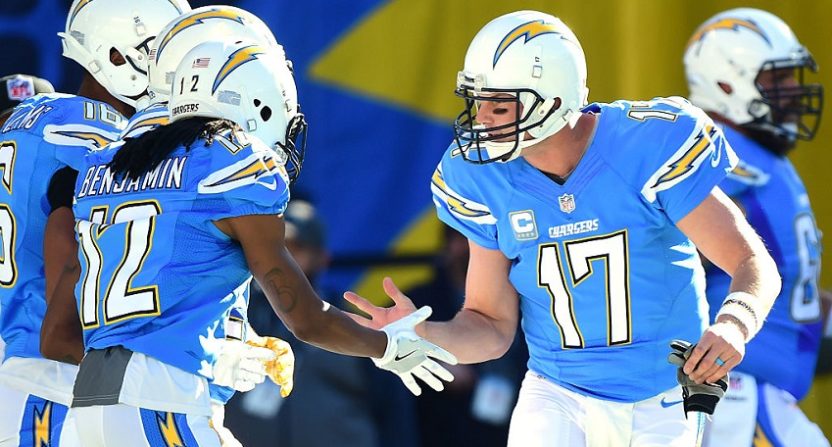 It is still a bit weird to talk about, but the Chargers are now based in Los Angeles, California. Just a short drive from their old home in San Diego, the team will play a home game in Los Angeles this year for the first time since their inaugural season in 1960.

In addition to playing in their original city this year, the Chargers will be attempting to get back into the playoffs after three straight seasons of watching from the outside. Although, the team missing the postseason in 2016 might have had something to do with the 26 players they placed on injured reserve. (That is not a typo.)

Gone is Mike McCoy as their head coach and taking his place is former Buffalo Bills offensive coordinator Anthony Lynn. Los Angeles really had no choice but to move on from McCoy after the team only won a total of nine games in the last two seasons.

This year will be Lynn’s first as an NFL head coach and the franchise is hoping he can bring a new mentality to a team that has finished last in the AFC West during each of the past two seasons.

Unlike many first-time head coaches, Lynn has the luxury of already having a franchise quarterback in Philip Rivers and a talented running back in Melvin Gordon to lead his offense. Gordon is coming off a breakout season in 2016 that saw him score 12 touchdowns and Rivers is still hungry to deliver a championship to the team that drafted him 13 years ago.

The veteran quarterback had a bit of a down season in 2016, as his 21 interceptions were the most of any signal caller in the league. However, Rivers was missing a ton of his weapons on offense last season due to injuries and he likely tried to do way too much.

This year, less pressure should be placed on Rivers’ shoulders to carry the offense, as Lynn likes to use a scheme that emphasizes the run-game. During Lynn’s two years as an offensive assistant with the Bills, the team finished each season as the NFL’s top rushing offense.

Try and envision the Chargers’ offense in 2017 resembling something similar to when the Denver Broncos changed to a more run-oriented offense towards the end of John Elway’s career in the late-90s. Lynn should know how that worked since former Broncos head coach Mike Shanahan gave him his first NFL coaching job back in 2000.

In addition to placing more of an emphasis on the rushing attack this year, Los Angeles also invested in improving their offensive line this offseason. Two of their first three draft picks this year were used on interior linemen (Forrest Lamp and Dan Feeney) and they added a new left tackle in Russell Okung.

When Rivers actually does get the opportunity to throw the ball this season, he can look forward to having receivers on the field who can actually make plays with the ball in their hands.

Keenan Allen returns to the team this year after missing all but one game last season due to a torn ACL, and Los Angeles is hoping for big things from former Clemson receiver Mike Williams after the team felt he was worthy of being selected with the No. 7 overall pick in this past spring’s draft.

Combine these two pass catchers with the talent that Los Angeles has at tight end this season in Hunter Henry and Antonio Gates (who just turned 37 in June) and this offense has a chance to be one of the best in the league in 2017. It may sound laughable to some, but the Chargers were still a top 10 scoring offense last year despite missing several of their best players.

On the defensive side of the ball, Los Angeles returns a handful of talented players in 2017 including defensive end Joey Bosa, linebacker Melvin Ingram, and cornerback Casey Hayward. Fellow cornerback Jason Verrett will also be back this season after missing most of last year with a partially torn ACL.

The defense also has a new leader this year, hiring former Jacksonville Jaguars head coach Gus Bradley to be the team’s defensive coordinator. The last time Bradley’s job was to focus primarily on the defense was back in 2012 when he was with the Seattle Seahawks and their defensive unit led the NFL in points allowed per game.

Los Angeles definitely has the pieces in place to play a postseason game in their 27,000-seat temporary home stadium this year. If the team can avoid having their injury report resemble last season’s, a return to the playoffs in 2017 is something that actually seems quite believable.