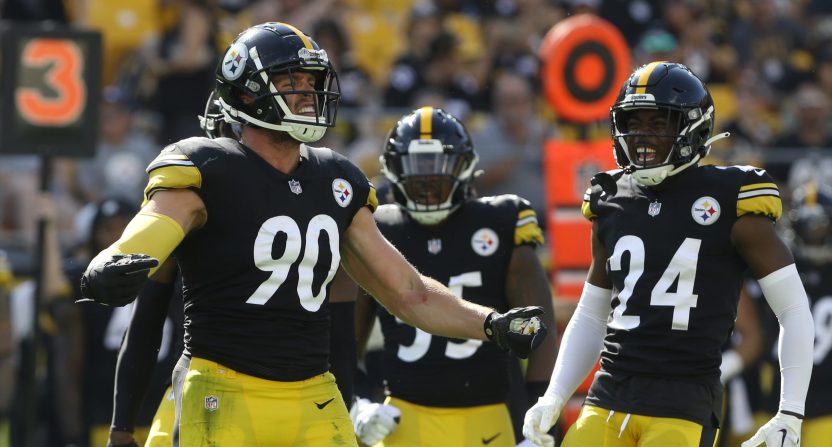 There were many injuries to key players during Week 1 of the NFL season, but perhaps none were more devastating than Pittsburgh Steelers star linebacker T.J. Watt exiting Sunday’s game against the Cincinnati Bengals.

Many speculated about the severity of the injury after a viral video emerged of Watt walking off the field while appearing to say that he “tore his pec”.

That has now been confirmed as the injury diagnosis for Watt, but there are some positive options for treatment moving forward that have emerged for Watt suggesting that he may not miss the entire season due to his pectoral tear.

According to NFL Network insider Tom Pelissero, Watt and the Steelers organization are entertaining additional options for treatment instead of surgery, and there’s belief that Watt will be able to return at some point this season.

#Steelers star T.J. Watt is still gathering additional opinions, but the belief is his pectoral tear will not require surgery and is not season-ending, sources tell me and @RapSheet. His exact return date depends on the healing process, but it could be before the end of October.

Shockingly, Pelissero additionally added that Watt could be back as soon as the end of October following his injury.

Considering the typical torn pectoral injury usually requires 3-to-4 months of recovery time before returning to action, this could potentially be great news for Steelers fans.

Watt’s importance to the Steelers’ defense cannot be understated, recording an NFL-high 22.5 sacks last season, which is tied with New York Giants Hall of Famer Michael Strahan for the most in NFL history.

He was in the midst of a huge game on Sunday against the Bengals before exiting, recording a sack, an interception, and three tackles for loss before exiting the game.

His absence may play a huge impact on the Steelers’ defense for the foreseeable future, but it is great that there’s now at least hope that he may be back at some point this season.