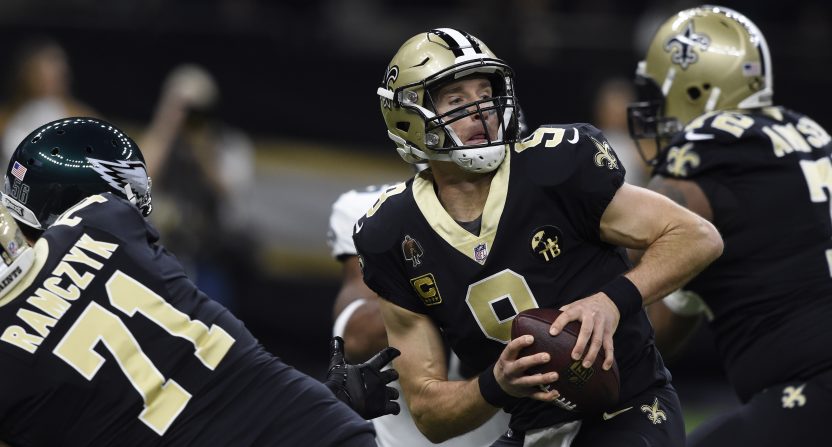 There were no surprises in this weekend’s NFL divisional round action. All four favorites and home teams won, with the Kansas City Chiefs beating the Indianapolis Colts, the Los Angeles Rams beating the Dallas Cowboys, the New England Patriots beating the Los Angeles Chargers, and the New Orleans Saints beating the Philadelphia Eagles. Only one game — Saints-Eagles — was within seven points, and two of the games — Chiefs-Colts and Patriots-Chargers — were never really close.

So now we move on to Championship Sunday, with the Patriots traveling to Kansas City to face the Chiefs, and the Rams going to New Orleans to take on the Saints. These are the No. 1 and 2 seeds in both conferences. Will this weekend of football be more entertaining, and will we actually see an underdog win?

Both games have the potential to be classics on the surface, and the opening odds reflect that. The odds also suggest that the teams in each game are viewed rather evenly on paper, with the home team getting a slight boost.

1. Playoff history. Tom Brady and Bill Belichick have been there and done that, time and time again.

Meanwhile, Andy Reid is 2-4 with the Chiefs in the postseason, and Patrick Mahomes has played one playoff game. Some won’t put much into this stuff, especially with how ridiculous Mahomes has been in his rookie campaign (he’ll win NFL MVP), but you can be sure the playoff experience and success will matter to some bettors.

The Patriots already beat the Chiefs this season, 43-40 in Week 6. Now, that of course was in Foxborough, where the Patriots have gone undefeated (9-0, including the playoff victory), and they went 3-5 on the road. But it’s Tom Brady we’re talking about, so many bettors will likely look past the the Patriots’ road struggles this season.

3. New England looked like a team on a mission in their 41-28 victory over a Chargers team that went 12-4 and won in Kansas City in Week 15 (Sunday’s game was more lopsided than the score indicates; the Patriots took a 35-7 lead into halftime).

As for Saints-Rams, it will be interesting to see the line movement as the week goes on. New Orleans looked awful in the first quarter vs the Eagles on Sunday, before finally turning it on and scoring 20 unanswered points. Will bettors look past this sloppy performance and look at New Orleans’ season as a whole? There’s surely more trust from the betting community in Drew Brees than Jared Goff, at least, especially with the game in Superdome.

Of course, the updated NFL Super Bowl odds would indicate that oddsmakers very much believe in the Saints.

Here the Patriots’ number — once again — jumps out as the one likely to get the most play.

And here’s a look at how those odds look compared to where they were before the season: