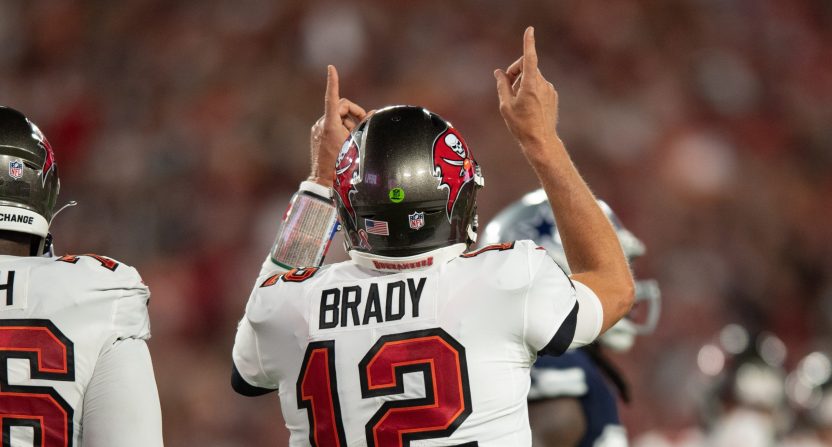 If the NFL wanted to reward the Tampa Bay Buccaneers for getting Tom Brady back in 2022, they sure have a funny way of showing it.

As the league’s 2022-2023 schedule was released on Thursday, it became clear very quickly that the Buccaneers were not done any favors with the way their schedule shakes out in the first month.

Tampa begins the season on the road against Dak Prescott and the Dallas Cowboys, followed by a road test against the New Orleans Saints, and then returning home to host Aaron Rodgers and the Green Bay Packers before a showdown with Patrick Mahomes and the Kansas City Chiefs.

Buccaneers' first month is no joke — on the road vs. Cowboys and Saints, then hosting Packers and Chiefs. Welcome back, Tom.

The NFL’s schedule-maker recently admitted that Tom Brady’s un-retirement forced them to start from scratch, which means that they can thank Tom for causing this tough start to happen.

Of course, the Buccaneers could also start 3-1 for all we know, given the way the league has been shaken up this off-season. Still, that’s a tough road to walk to start an NFL season and could make a difference as Tampa hopes to get back to the playoffs in what could be Brady’s actual final season before he heads to the TV booth.

For now, the NFL world certainly had some strong thoughts on the way Tampa’s schedule starts out in September.

Trying to get Brady in that broadcast booth quicker https://t.co/d4mbupKMhb

Also Bucs likely without Chris Goodwin for some if not all of these games https://t.co/HWb1sbqZKT

Hint before the schedule madness starts: just about every game on the schedule (save 4ish) is going to be tough. Not a lot of easy stretches or easy wins