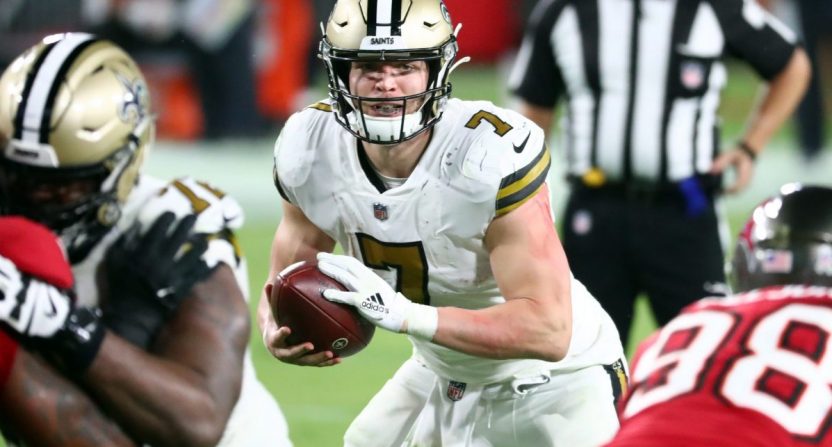 When Drew Brees was forced to leave the game last week with what were later revealed to be very serious injuries (that may have been aggravated during a sack that was still a dubious roughing penalty), Jameis Winston took over.

That makes sense, as Winston is the backup quarterback, and has been a career NFL quarterback.

Now, though, with the Saints preparing for the Falcons on Sunday, it looks like Sean Payton is doing a very Sean Payton thing: turning to Taysom Hill instead.

Intrigue in New Orleans: The #Saints have given QB Taysom Hill starter reps in practice this week, source said. So while Jameis Winston took over for injured Drew Brees last week, signs are pointing towards Hill getting his first NFL start at QB if all checks out after practice.

Saints’ QB Taysom Hill will start Sunday vs. the Falcons, per source. Hill took all the starter reps at practice this week. Jameis Winston will be the backup.

Payton, of course, loves using Hill as a gadget/wildcat quarterback to spell Brees, sometimes to a fault as when Hill fumbled during a key late drive against Green Bay earlier this season. Brees may not be close to his career peak anymore, but Payton putting so much faith in Hill has been a fascinating subplot.

So it makes sense that without Brees at all, he might turn to Hill for the full start. Hill, of course, played quarterback at BYU in college, and has done everything from running routes and catching touchdowns for the Saints to serving as a sort of run-first option quarterback. What the offense might look like with Hill as the starter is a real question; it’s unlikely Payton would have him run the entire playbook, but then again, he certainly seems to have more faith in Hill than just about anyone else.

That’s not even meant as a slight to Hill! It’s more that Payton just clearly loves him so much.

look, if taysom hill doesn’t get a start or two, how can the vikings sign him to a hilariously bad contract in 2022?

The Saints are in a battle with Tampa Bay for the AFC South, though they look pretty safe for at least a Wild Card slot in the NFC. It’s unclear how long Brees will be out, though broken ribs and a punctured lung are the kinds of injuries that don’t tend to snap right back to health. It’s possible Payton believes that tailoring an offense around Hill is the best way to compete (that would be on brand), and might look to use the final few weeks of the regular season to test that theory.

And, hey, if it doesn’t work, you can throw Jameis in there and hope for the best.