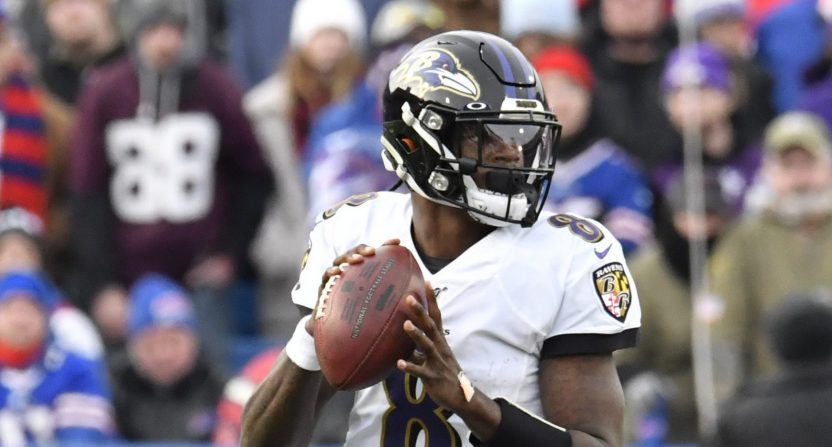 As the 2019 NFL season winds down, here’s a look at the 23 position players currently on the inside track to become first-team All-Pros.

There’s little doubt about this; Jackson is running away with the MVP award. He’s a top-three passer and a top-10 rusher at the same time. He’s changing the game.

The third-year superstar leads the league in scrimmage yards by a margin of more than 400, and he’s the NFL touchdown leader with 18. He’s slowed down a tad of late, but this remains a no-brainer.

Thomas is on pace to set a new single-season record for receptions, and he also leads the NFL with more than 1,500 receiving yards. Godwin ranks second on that yardage list and has nine touchdowns to Thomas’ eight. He edges out DeAndre Hopkins, who has fewer yards and touchdowns, but ranks second to only Thomas with 99 catches.

The league’s second-leading rusher has five more touchdowns than the leader in that category, Nick Chubb. And he’s been an absolute game-changer with four 100-yard efforts in the second half of the season.

George Kittle is a damn strong candidate, but only six wide receivers have more yards than Kelce, who with 1,131 has a massive lead over Kittle, Darren Waller, and Zach Ertz.

The 30-year-old has been the steadiest all-around player at a position that is thin across the league.

The perennial Pro Bowler is the most versatile and steady interior offensive linemen of this era.

The versatile Ramczyk has allowed zero sacks while dominating as a run blocker at the 14-game mark. He beats out Mitchell Schwartz.

Barrett, Watt, and Chandler Jones are the only players in the league with more than a dozen sacks and six forced fumbles, but Watt’s been a bigger all-around playmaker and has way more quarterback hits than Jones. You can’t deny Barrett and his league-leading 16.5 sacks.

Donald hasn’t been quite as dominant as the last couple seasons, which is why he probably won’t win Defensive Player of the Year. But he’s still an utter matchup nightmare with 11 sacks who changes games. Heyward doesn’t get to the quarterback as often, but still rocks as a pass-rusher, dominates in run defense, and accumulates tackles like no other interior defensive lineman in the game.

Kuechly is the only player in the league with 125-plus tackles and more than 10 passes defensed. Wagner ranks second in the league in tackles and has contributed well as a pass rusher. And the underrated Kendricks has become a complete stud in both pass and run defense.

Gilmore is the undisputed top corner in the game and a DPOY candidate. He and White share the league lead with six interceptions each, but White also has two forced fumbles, four tackles for loss, and a sack.

Adams excels in every realm and is clearly the best all-around safety in the NFL, while Smith is undoubtedly the top coverage safety out there.

It seems like every week he’s facing a superstar receiver. And every week, he essentially shuts them down. The numbers aren’t quite there yet and he could use more support, but the third-year Central Florida product has become a coverage star.