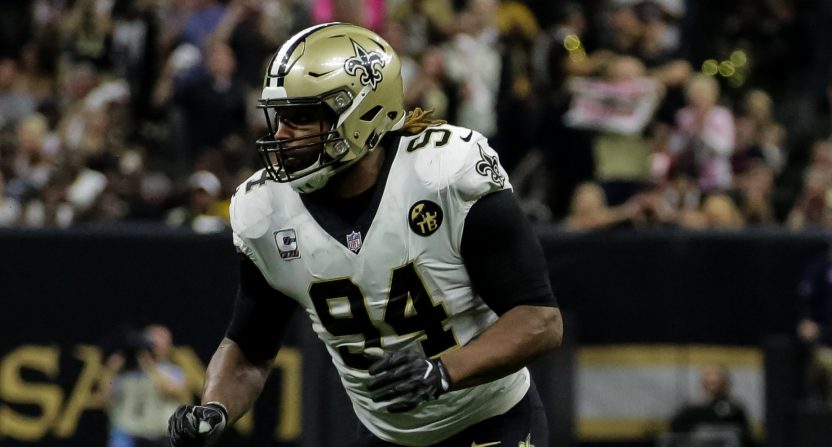 There are many, many games within every game — especially in the nuanced sport of football. Which of those mini-games — or, as they’re more commonly known, “individual matchups — are most interesting entering the NFL’s divisional playoff weekend?

The Chiefs might not have a good defense, but their pass-rush is underrated. And Jones quietly put together an incredible season inside. The third-year defensive tackle ranked third in the NFL with 15.5 sacks, and they need him to come through with their backs against the wall while facing a tremendous Colts offensive line on Saturday. That’ll put a lot of pressure on young first-round interior offensive linemen Ryan Kelly and Quenton Nelson, but Nelson is the real attraction. Just look at what he did to poor Jadeveon Clowney last week.

Desir was the best defender on the field while holding DeAndre Hopkins in check last week, but that wasn’t an aberration. The fifth-year cornerback has been on fire during the second half of the season, earning a lot of money in a walk year. He might not have the speed to shadow Hill, and with his height advantage over Kenny Moore the Colts might be better off matching him up with Sammy Watkins and/or Chris Conley at times, but ultimately the Indy’s best cover corner will have plenty of matchups with the league’s fastest wide receiver. How those matchups go could decide whether or not the Colts pull off the upset.

Donald, who’s likely to win the Defensive Player of the Year award after becoming the first interior rusher in NFL history to record 20-plus sacks in a season, will likely deal with Martin often on Saturday night. The five-time Pro Bowl right guard will probably get some help from fellow interior offensive linemen Connor Williams and Joe Looney, but he’ll have to make some plays on his own despite a lingering knee injury. If he doesn’t, it’ll be hard to keep Donald from tipping the scales in the Rams’ favor.

In order to pull off the upset, Dallas will also have to contain superstar Rams running back Todd Gurley. And while that will generally have to be a team effort on defense, Vander Esch will be charged with leading most battles with Gurley. Not only is the rookie linebacker the team’s top tackler and clearly the best run defender in Dallas, but he’s also strong in pass coverage. That’s important, because he’s likely find himself in a lot of one-on-one situations with the versatile, catch-happy Gurley in pass defense.

You’ll see Marcus Peters on Cooper as well, just because Wade Phillips doesn’t typically assign rovers. But Peters is such a liability and Talib is a better size fit for Cooper. Both former AFC West rivals are playing extremely well, and they’re extremely familiar with each other after facing off a handful of times in matchups between the Raiders and Broncos between 2015 and 2017. The Cowboys don’t have a lot of other options in the passing game, so a big game from Talib could make things pretty tough on that Dallas offense.

Gilmore is a first-team All-Pro, while Allen is coming off a second consecutive Pro Bowl season. The former doesn’t give up anything in pass coverage, while the latter seemingly catches everything Philip Rivers throws his way. This matchup is rightly getting a lot of hype — Gilmore praised the hell out of Allen early in the week — because it’ll be a lot harder for Los Angeles to win in Foxborough if Allen is contained.

Ingram and Bosa move around a lot, so there’s no telling which New England offensive tackle either will see more of on Sunday. Regardless if it’s Ingram vs. Cannon, Ingram vs. Brown, Bosa vs. Cannon, or Bosa vs. Brown, it’ll likely matter. After all, the key to beating the the Patriots is a natural pass-rush on Tom Brady, which means these guys will almost certainly have to win one-on-one matchups. Brown has the size and strength to thwart either rusher, but he’s not technically sound and can be taken advantage of. Cannon is more proficient but also lacks the speed to hang with Ingram or Bosa. Both tackles will get plenty of help, but that could affect the next matchup on this list…

The Chargers went without linebackers for most of their wild-card victory over Baltimore, partly because it was good strategy, but partly because they don’t have many healthy good ones left. They might not stick to that approach in New England, but look for James to spend plenty of time in the box. The rookie safety is a phenomenal run defender and a go-to cover guy underneath, so he’ll be tasked with slowing down White on screen, wheel, and flat routes while also keying on White, Michel, and whoever else the Patriots decide to use on the ground. If the Defensive Rookie of the Year candidate can take that element away from the New England offense without a lot of help from fellow defenders, Brady could be in big trouble.

You could sub Avonte Maddox in for Douglas here. Whoever spends more time on the NFL catch leader will find themselves in the most important matchup for the Eagles defense. Douglas might make a little more sense because he’s got five inches on Maddox, who can probably do a better job matching Tre’Quan Smith’s speed. From afar this looks like a mismatch, and it might be — but Douglas, Maddox, and slot man Cre’Von LeBlanc (who should also see plenty of Thomas inside) have all played shockingly well the last few weeks.

This one is so simple, because Jordan lines up almost exclusively on the left side of the defense and thus will inevitably go head-to-head with the 2017 All-Pro Eagles right tackle throughout Sunday’s game. The former is one of the top five pass-rushers in the NFL, while the latter is one of the five best right tackles in the league. Johnson had some trouble with Jordan when they met in November, but he did manage to keep his enemy from recording a sack. That might again be necessary if the Eagles want to pull off the upset at the Superdome.