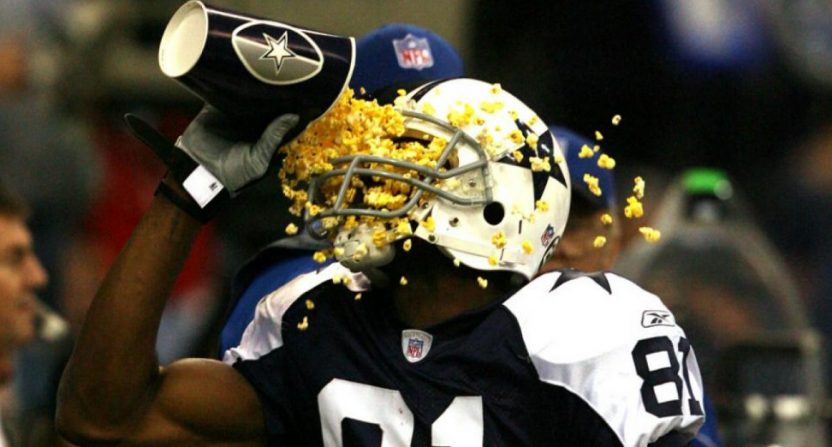 The superdiva ex-wide receiver upset the establishment again by saying he’s not going to attend his own Pro Football Hall of Fame induction. That’s perfect. T.O., as usual, makes it all about himself. Grace and decorum have rarely been part of his playbook.

Predictably, this prompted faux outrage by the Hall of Fame voters and inductees.

Jarrett Bell of USA Today wrote, “Rather than rising above the criticism and accepting his honor with class and dignity, he’s going bush league, putting one more mark on a legacy that has already been tainted by too much foolishness.”

Gary Myers, the former New York Daily News writer and contributor to The Athletic, said he “wouldn’t have voted for Terrell Owens if I knew he wasn’t going to show up.”

Even Hall of Fame coach Tony Dungy weighed in.

I feel sorry for Terrell Owens. If he chooses not to attend the Hall of Fame induction ceremonies he will be missing one of the most moving and emotional experiences someone could have in football. Indescribable moments. It will be his loss, not the Hall’s. pic.twitter.com/s1hc5qoN71

Owens’ decision isn’t classy. It has annoyed most of the NFL zealots and provides more ammunition for those who hated his narcissistic style of play. He has been called a bad teammate, accused of undermining the locker room with his behavior.

Owens deserves the right to celebrate this Hall of Fame achievement however he wants. It might not be the decision you would make. But once these voters made the rightful choice to put him in Canton, they should keep their opinions to themselves.

For his entire career — one that by any objective measure was brilliant — Owens had to listen to criticism. You could make an argument that T.O. is the third-best wide receiver of all time, behind only Jerry Rice and Randy Moss. He’s second all-time in NFL history in receiving yards (15,934) and third in receiving touchdowns (153).

It’s ludicrous to suggest that Owens would have been a better player if he simply handed the football to referees after scoring touchdowns instead of celebrating with pom poms, mocking Ray Lewis or throwing popcorn in his own face. The NFL hates personalities and tries its best to scrub it out of players. Owens was the non-conformist who wasn’t going to play that game. He was his own person – and he paid a price for that.

T.O. played for five teams, including three in his last three seasons. His individualism wore on coaches and teammates. He wore out his welcome in San Francisco, Philadelphia, Dallas, Buffalo and Cincinnati. But you cannot question his production. The NFL and the people who cover the league love tough guys who play through the pain. Owens played in the Super Bowl with an injured leg and still caught nine passes for 122 yards against the New England Patriots.

In Owens’ final year, the 37-year-old had 72 catches for 983 yards with nine touchdowns for the Bengals in 2010. And yet, following that season, his career was over. No team signed him. Now, you could say it was his age. But normally receivers that productive get another contract. Owens was ignored to the point where people wondered if he was being blackballed. He certainly thought so.

The NFL doesn’t embrace individualism. It sells “team.” It does so because the brutal nature of the game churns up young bodies. The average lifespan of an NFL career is 3.3 years. Injuries and salary cap restrictions lead to regular roster turnover. It’s much easier to celebrate a “team” rather than a person because the players change so often.

Owens survived 15 years in the NFL because he was in impeccable physical shape. And because he was so excellent at his craft, coaches were willing to deal with his baggage. Yell, showboat and dance all you want, as long as you get into the end zone.

T.O. challenged the establishment with his play and his bravado. Fans, the league, most media members and some teammates despised him for that. The funny part is he wasn’t always this way. As a youngster, he was known as being a quiet kid. He didn’t blossom into the personality we know today until the “The Catch II” when his touchdown in the playoffs beat the Packers in January 1999.

That was a defining moment in his career and Owens was certainly not quiet after that. Years of having his personality bottled up by his family, the NFL. No more. He exploded on the stage and spoke freely, no matter the consequences. His big mouth made him a huge star and one of the league’s most polarizing figures.

All wide receivers complain. Yes, Owens bitched on the sidelines. Guess what? So did Jerry Rice.

NFL coaches are used to competitiveness to a degree. T.O. was something else. He was going to let everyone know his emotions. If Owens were an NBA player, that would be less problematic. NBA players speak their minds and have the power over coaches and sometimes management.

In the NFL, that is frowned upon. So, despite excellence, the Hall of Fame voters made T.O. wait to be inducted into Canton. And now they have the audacity to act offended because Owens doesn’t want to celebrate with them or the rest of the football establishment?

Look, it’s clear that Owens was his own worst enemy at times. He could have been nicer, more bland and careful with his words and actions. That behavior probably would have gotten him into the Hall of Fame on the first ballot instead of the third.

We cheer false modesty and criticize real arrogance. You can say a lot of things about Owens, but he was never a phony.