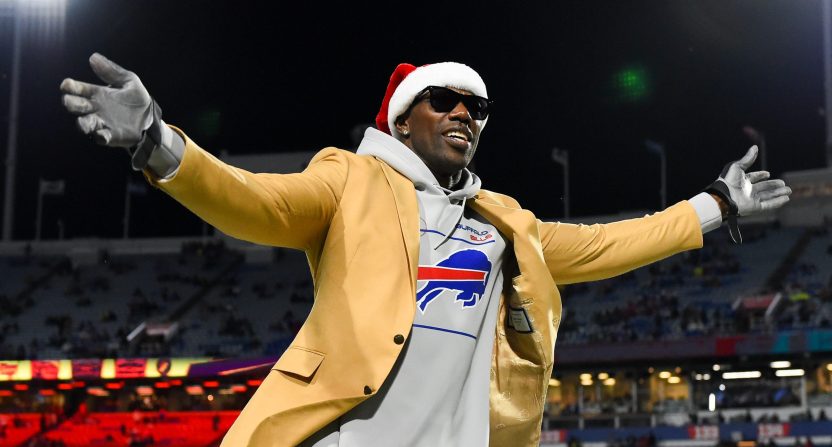 Two of the most mercurial personalities in the NFL’s recent history are uniting to play together. Terrell Owens is reportedly coming out of retirement and joining the Fan Controlled Football League where he will play for the Zappers, who currently feature Johnny Manziel at quarterback.

Terrell Owens, one of the greatest receivers in NFL history, has agreed to come out of retirement and will return to professional football with startup league Fan Controlled Football, a source told Reuters on Thursday. https://t.co/Ftto2J4dGN

The 48-year-old hasn’t played football since 2010 when he spent a season with the Cincinnati Bengals. There’s no denying that he was one of the best wide receivers in NFL history, finishing third all-time in career receiving yards and receiving touchdowns. But the six-time Pro Bowl selection and five-time first-team All-Pro has also been away from the game for a decade.

The Pro Football Hall of Famer briefly returned to football in 2012 when he joined a Texas-based Indoor Football League team but was released after eight games when he violated his contract.

The FCF League’s style of play isn’t the same grueling setup as the NFL and could make it easier for him to compete. The league plays a 7-on-7 style of football on a 50-yard field and relies on fans to call the plays as if they were playing a video game. The seven-week season is followed by playoffs and all games will be played in Atlanta.

According to Reuters, Owens will be mic’d and wear a helmet camera during games. He’ll “provide content for streaming provider fuboTV by interviewing team owners and players during games when he is not playing.”

The news that the flamboyant Owens was returning to football, and would be paired with the controversial Manziel, certainly brought out the reactions on social media.

I'm convinced TO could suit up and start on an NFL team today 🤷‍♂️ https://t.co/IyBxUpFJPR

Johnny Manziel throwing to TO is gonna peak entertainment https://t.co/B3Y75H5yiK

Cannot imagine this what this man's car payments are like https://t.co/i3UnSaLx2W

Given both their track records, it remains to be seen if this duo actually ends up playing together or if the whole thing falls apart before then. The trainwreck quality to both of them is part of the reason we’ll be paying attention though.